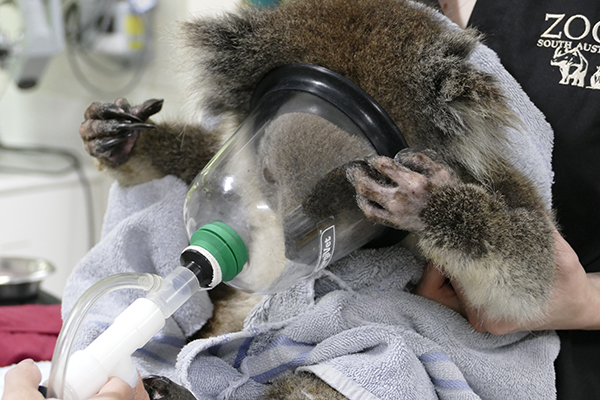 A Southern Koala, touchingly known as Four Paws because of how many of her paws were injured in the Cudlee Creek bushfire, has been recovering under the expert care of Adelaide Zoo’s Animal Health Centre.

Along with another koala known as Two Paws, Four Paws was brought into Adelaide Zoo after being rescued by an Adelaide Zoo keeper who also volunteers for the CFS and was on the ground during the Cudlee Creek fires.

Four Paws has been expertly checked over by vets who are pleased to say she now only needs bandages on two of her feet and is expected to make a full recovery.

Zoos SA Veterinarian Sarah Alexander said Four Paws’ burns are improving and she hopefully won’t need too many more treatments advising “we usually change the dressings every three days depending on the severity of the wounds, but Four Paws is close to having all her bandages removed. She’s making amazing progress.”

Along with soothing creams and soft padding, silver-impregnated dressings are being used on the burns for their antimicrobial properties, which allows vets to forego the use of antibiotics which is known to be bad for koalas’ gut health.

As well as caring for the current koala pair, Zoos SA are in constant contact with other wildlife and emergency care facilities to offer their support and wildlife veterinary assistance.

They advise to be in a position where they have the resources to take in another 15 koalas, whether that be for emergency veterinary attention or to house koalas safely until their wild release, which will hopefully provide some respite to those who have been caring for these injured animals over the last few weeks. 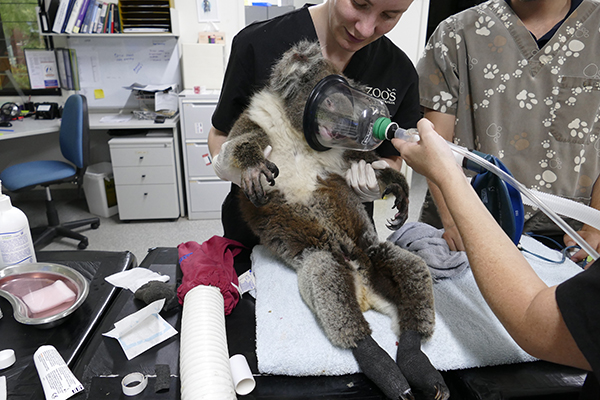 The Animal Health Centre is also presently caring for a juvenile Ringtail Possum known as Mittens who was also found in the Cudlee Creek fire aftermath.

Mittens arrived at Adelaide Zoo after the same keeper brought her in for treatment.

“We’re amazed by her strength. For such a young animal to survive such intense heat is truly remarkable.

“We estimate she’s only about seven months old.”

Once the animals have fully recovered and are given a clean bill of health by thevets, it’s hoped they will all make a safe journey back to the wild.

The safe return of these animals to their natural habitat is vital for local wildlife populations that have suffered horrendously since the fires began.

A recent statement by the World Wildlife Fund for Nature (WWF) estimates that over 1.25 billion animals have been lost in the tragedy.

While this is a truly devastating statistic, it’s important to remember the network of amazing organisations and volunteer groups who are supporting animals around the country in their time of need. 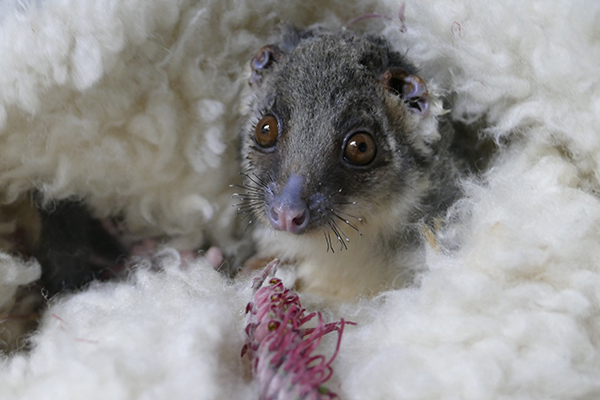 Alexander added “what we're seeing in Australia at the moment is horrific, but it's heartwarming to know so many people are coming together to support local wildlife.

“This is especially important as the effects of climate change on weather patterns, drought and fire around the country mean we’ll see more wildlife in need in the future.”

The conservation and restoration of crucial habitats and animal populations on this scale will need an urgent and long-term approach.

Thankfully, this is where a global network of good zoos can step in to assist.

Zoos SA are joining forces with the Zoo and Aquarium Association Australasia (ZAA) and accredited zoos around the world to launch a Wildlife Conservation Fund which will raise funds for both emergency relief efforts and long-term crisis action on the ground.

Zoos SA add “we’ve been so touched by how many of our incredible supporters want to help and know you will do whatever you can to help our native wildlife and ecosystems bounce back from this tragedy.”

Zoos SA highlight the need for tax-deductible donations to the ZAA’s Wildlife Conservation Fund to help secure a brighter future for fire-affected species.