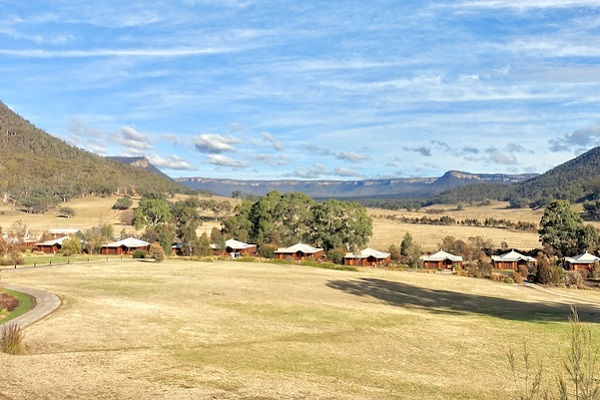 The luxurious Emirates One&Only Wolgan Valley resort to the west of Sydney has suspended guest arrivals until 23rd December - and other resorts are on alert - as enormous bushfires continue to burn in the Blue Mountains region, covering Sydney’s skies with a haze of smoke.

With the approach of bushfires, the NSW Rural Fire Service has advised “if you are in the Wolgan Valley area, it is too late to leave. Seek shelter as the fire approaches. Protect yourself from the heat of the fire.”

“Whilst there is no immediate threat to the resort, the surrounding bushfire activity and subsequent smoke haze is likely to compromise the enjoyment of the resort experience and we must therefore pause current guest arrivals until 23 December 2019.”

On its website, the NSW Rural Fire Service notes “the Blue Mountains is a unique world heritage area and also one of the most bush fire prone areas in the World. The population across the district is 75,000 people who live in, or in the vicinity of 27 towns and villages across the Mountains.

“The local government area covers 143,000 hectares of land in the Greater Sydney Region. About 70% of the area is incorporated into the World Heritage Blue Mountains National Park, with approximately 11% of the total land area in private ownership.”

An emergency warning on Monday for the Gospers Mountain ‘mega-fire’ west of Sydney said the fire covered more than 378,000 hectares and was “spreading quickly in the Ben Bullen State Forest, north of Lithgow”.

The Gospers Mountain fire began six weeks ago, turning into a ferocious mega-fire after several fires combined to the north and west of Sydney, covering almost 400,000 hectares.

Fire crews lost control of a backburn on the ‘mega-fire’ on Sunday afternoon, triggering an enormous blaze that destroyed 20 structures around Mount Irvine, Mount Wilson and Mount Tomah.

More than 1 million hectares have burnt across NSW this bushfire season, many in popular holiday destinations.

With news of the fires and smoke having an impact on regional tourism and those who depend on it, Tourism and Transport Forum (TTF) Chief Executive Margy Osmond earlier this month urged holidaymakers to think twice before their cancelling Christmas and summer getaway plans.

Osmond told the ABC it was important for people planning to travel during the holiday period to get the right information about fires within that region before they made any decisions to cancel.

“It is the busiest time of the year for a lot of our regional communities from a holiday point of view, so that’s why I say check.”