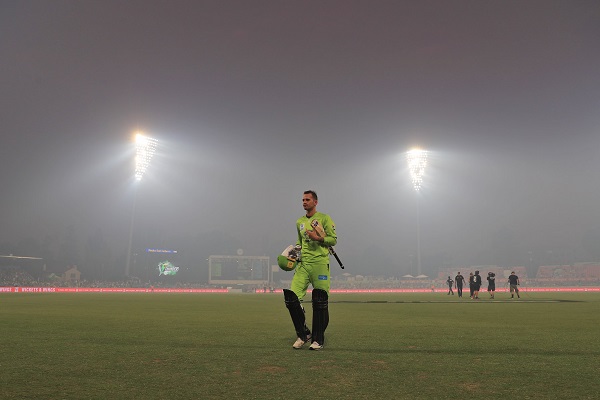 The ladder-leading Thunder, set a target of 162, reached 1-40 after 4.2 overs when umpires stopped play because of concerns about air quality and visibility.

Canberra has been blanketed by smoke from fires raging on the NSW South Coast over recent days and while conditions were deemed safe to begin the match at 6.10pm local time, play was stopped about two hours later when visibility and air quality deteriorated rapidly.

The ladder-leading Thunder, had enough runs on the board to be declared winners after five overs but BBL rules dictate a minimum of five overs is required in the second innings to constitute a game, so points will be split.

Thunder captain Callum Ferguson, who was 27 not out, appeared angry when umpires Paul Wilson and Sam Nogajski told him they were halting play during Rashid Khan’s opening over.

However, Thunder coach Shane Bond later said of the decision “you've got to stop to take a breath and say losing a point is not the same as losing your house.

“You always want to do what you can to get a game in [but] there's some challenges for Cricket Australia and the BBL, and ultimately you just want to get it right so the fans don't get sick.

"We thought you could finish a game [based on visibility] ... but the air quality was poor, people went down in the stands. The fact you drop a point is not anything compared to what other people are going through."

The Air Quality Index in Canberra has hovered at a ‘hazardous’ level this evening, according to ACT Health with their website advising all Canberrans "to avoid physical activity outside".

Several spectators and event staff wore smoke masks as breathing became increasingly difficult as the sun went down, and post-match, a press release issued by Cricket Australia described the playing conditions as "dangerous and unreasonable".