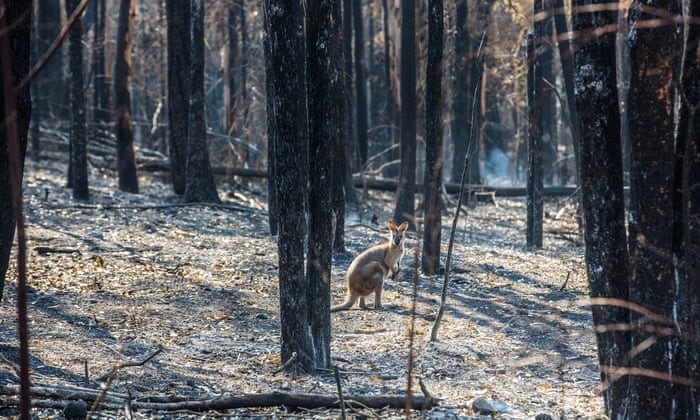 Wildlife Conservationist and Aussie Ark President, Tim Faulkner, declares native wildlife state of emergency for New South Wales due to the mass loss of wildlife currently being witnessed throughout the state.

Home to more than one million species of plants and animals, Australia’s wildlife is found nowhere else in the world.

Aussie Ark President, Tim Faulkner believes “substantial investment has been seen by governments in fire-fighting, National Parks and the protection of private properties and infrastructure. This is where the focus has been. Nobody has declared a native wildlife crisis, yet that is exactly what it is – a native wildlife state of emergency. So much has been lost already and it won’t come back without help.”

Earlier this week, staff from Aussie Ark, along with staff from the Australian Reptile Park, were assessing drought and fire affected areas in the greater Barrington region. The results witnessed by staff were devastating.

The wildlife organisations had to relocate 50 endangered Hunter River turtles from dried up waterways. 10 platypus were found and transferred with five requiring veterinary care as they were unable to be released due to poor health conditions. The two organisations also monitored and provided food drops for Brush-tailed rock-wallabies and assessed the possibility emergency intervention for the critically endangered Manning River turtle.

Faulkner added “what is needed is a mass upscaling of initiatives and projects that directly impact WILD native wildlife. We need public and private partnerships, corporate, government and philanthropic groups, conservations groups along with the community to recognise the crisis and support organisations delivering results on the ground to our native wildlife.

“We need to rebuild. What is needed is a mass scale combined effort and it is needed now, not later. Many of the species affected were already at risk of extinction, such as Koalas, Brush-tailed Rock-wallabies, turtles, quolls and platypus. Entire populations and ecological communities have been entirely wiped off the face of the earth, some will never be what they once were.”

Faulkner notes “if I could have one New Year’s wish it would be that Australia steps up and addresses the native wildlife state of emergency and rebuild.”

As a not for profit organisation, Aussie Ark raises the necessary funds to continue its ambitious vision of providing a long-term future for Australia’s threatened wildlife. Investment allows for the construction of captive facilities and predator proof fencing on large wild sanctuaries. Aussie Ark is a registered environmental organisation and charitable institution under the Australian Charity and Not-for-Profit Commission. Aussie Ark has deductible gift recipient status (DGR status) and is registered for GST purposes.