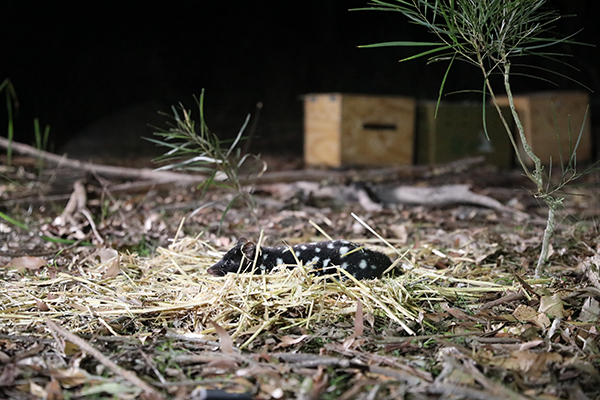 There were 40 quolls released last week, including 17 bred by Aussie Ark in its wildlife sanctuaries at the Barrington Tops.

This is the second release of quolls in the area, with hopes for more joeys to be bred in the wild.

Quolls have been extinct on the mainland since the 1960s due to predators such as foxes and cats, culling by humans and disease.

Aussie Ark has been breeding quolls in its fenced sanctuaries at the Barrington Tops with 57 joeys born since 2017.

“As a conservationist you spend your life working towards a moment like this, seeing an endangered species back in the wild with great hopes for the future,” Aussie Ark Curator Hayley Shute said.

“The second release of quolls into Booderee National Park is a sign of hope for the species that, one day, we will bring the bush alive again with our native species.”

The quolls will be monitored by Rewilding Australia and it is hoped the newly released mammals will breed and grow the wild population.

Eastern quolls are mainly solitary and nocturnal animals. While the main component of their diet is spiders, cockroaches and grasshoppers, these small mammals are also impressive hunters. Their appetite for rabbits, mice and rats helps keep the populations of these pests under control.

Aussie Ark will continue to breed the quolls, with support from its partners Australian Geographic and Global Wildlife Conservation, to grow an insurance population. Some quolls will be released into the Ark’s new 400ha wildlife sanctuary later this year.

To find out more about Aussie Ark visit aussieark.org.au