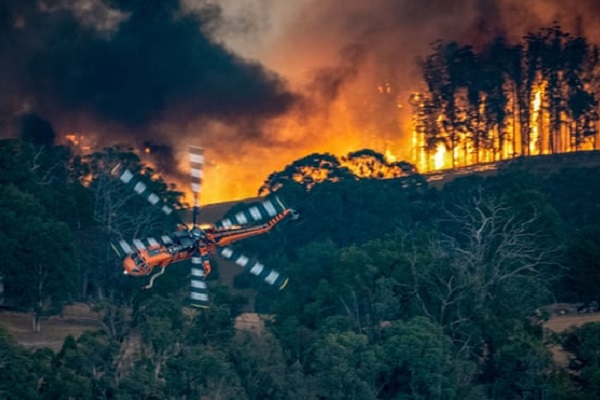 The deadly bushfires engulfing Australia’s eastern coast will cost the tourism industry hundreds of millions of dollars, according to the Australian Tourism Industry Council (ATIC).

Alone among tourism bodies making comment on the current bushfire crisis, ATIC fears that images of the bushfires being reported by media around the world risk.

As reported by Guardian Australia, almost 4,300 insurance claims totalling $297 million have been lodged since the main fires began on 8th November, but the cost is set to climb as the full extent of damage is uncovered and more areas burn over what is expected to be a dangerously hot weekend.

The fires have devastated some of Australia’s key tourism areas, including East Gippsland in Victoria and the NSW south coast.

On Sunday, Victoria’s Country Fire Authority ordered the evacuation of East Gippsland, which is visited by tens of thousands of tourists every summer. On Thursday the naval vessel HMAS Choules was off the coast of Victoria waiting to evacuate some of the 4,000 people trapped in Mallacoota, unable to leave because roads from the town have been cut off.

In NSW, the fires have devastated tourist towns including Batemans Bay and Mogo, destroying hundreds of houses and businesses.

On Wednesday, Fire and Rescue NSW also ordered people to evacuate the Kosciuszko national park, including the Thredbo resort, which operator Event Hospitality & Entertainment said would be “closed until further notice”.

ATIC Executive Director, Simon Westaway, said the first priority of tourism operators was to help their local communities, but there was “an unquestionable mounting impact on tourism from these fires”.

Westaway stated “the summer school holiday period is the high peak season for many of our regional and rural tourism hotspots.

“It is still too early to fully know and assess the commercial impact but it will clearly run into hundreds of millions of dollars over the near term.”

Noting that the bushfires were getting heavy coverage around the world. Westaway added “ATIC is calling on our government tourism authorities to remain vigilant and be nimble and coordinated to any perceived or real impact to future travel or a decision to defer visiting our country for fear of not being open and accessible, or what these fires may be doing to our pristine nature.

“Our industry is terribly resilient but the severity and scale of these fires and their literal strong global reporting and physical impact can’t be ignored over the ensuing period.”

On Thursday, the Insurance Council of Australia (ICA) said that since 8th November it had declared a catastrophe in 236 postcodes across four states, including areas on the east coast stretching from East Gippsland to the Gold Coast.

The ICA said 4,299 claims have been lodged, with 1,485 properties destroyed, but “these loss numbers are expected to increase as further assessments are undertaken”.

The operator of the Reef Casino in Cairns said disaster insurance had already become more expensive.

Reef Casino Trust told the stock exchange its insurer reduced its coverage against cyclones, floods and tidal waves and increased its annual premium by $487,000, to $1.3 million.

Image: The bushfires have devastated some of Australia’s key tourism areas, including East Gippsland in Victoria. Courtesy of Victorian Department of Environment, Land, Water and Planning.