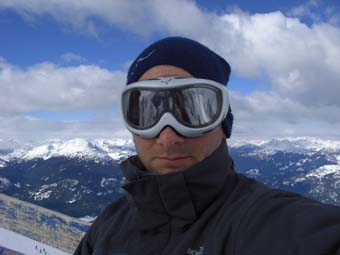 A new insurance company that specialises in personal and property insurance for the often very specific needs of the adventure travel and sports market has been launched.

No Worries Insurance covers those participating in activities including skiing and snowboarding, surfing, golf touring and cycle touring as well as specialist cyclist insurance for road, mountain and even electric bikes for all from professional riders to recreational cyclists.

Queensland-based Managing Director Tony Venning (pictured above) made the decision to start No Worries Insurance in late 2013, after a 20 year career working in London, Melbourne and Sydney for major international insurance company, JLT.

As of September 2014, the Australian owned and operated firm was launched with the backing of global insurance underwriters, Lloyd’s of London.

After developing insurance coverage packages in his former career for some of the world’s biggest sporting events and entertainment names including the 2012 London Olympics, the F1 British Grand Prix, the 2011 Rugby World Cup and the Rolling Stones, as well as community insurance programs for Cricket Australia and Australian Football League, Venning sought to create an insurer for people with needs similar to his own: adventure sport enthusiasts, world travellers - people who are time poor and want worldwide insurance coverage so they can keep doing the things they love doing.

Drawing from his insurance career Venning can cite a range of examples of where people might assume they are covered by insurance but may not be.

He explains “people who love skiing, cycling, surfing or travelling can be shocked when they need to make an insurance claim and then find out there’s a clause in the fine print that prevents them from doing so.

“For instance, most other companies (often) won’t provide coverage for bikes valued at over $1,000.

“Some bikes, especially those with carbon fibre frames can be as expensive as a car.

“Additionally, most other insurance companies will insist on trying to repair a broken carbon frame rather than replacing it.

“For the serious cyclist there’s no way you’d hop back on a ‘patched up’ carbon frame especially if you’re travelling at high speed.

“We understand the difference and provide new-for-old-replacement on all bikes less than two years old in the event of major damage.

“Similarly, if you’re on a ski or surfing holiday and perhaps travelling through multiple countries chasing the best snow or waves, some companies won’t cover you for winter sports activities or adventure sports and activities.

“Our travel product includes cover for your lift pass, ski and snow boarding equipment and even piste closure. The last thing you want to be worrying about when you’ve had $2,000 worth of ski gear stolen or are in hospital after a major wipe-out is how the hell you’re going to pay for it all when you get home.”

Venning has experienced firsthand the horror of being involved in an accident overseas and requiring urgent medical attention, only to find out that his insurance did not cover the costs.

He recalls, “my wife and I hired a motor-scooter in a remote, island village off the coast of Vietnam.

“We’d enjoyed lunch and my hands were still a bit sticky from eating. As we rode away along the poor quality, gravel road a number of wasps started following us and attacking my arms and legs. As I tried to brush a wasp away I lost control of the bike and we both fell off.

“We didn’t really realise the severity of our injuries at the time but as well as my wife’s injuries which included extensive skin lacerations, I had lost most of the skin on my left hand side, my ankle was broken and I had also severed an artery in my ankle meaning blood was spurting out, about a foot high in the air.

“We were rescued by a local and driven in a local banana truck which doubled as the ambulance to a very basic medical clinic with questionable hygiene standards and even more questionable medical experience.

“After requesting some crutches one of the locals got a band saw and literally cut two wooden sticks out of the forest and presented them to me. Whilst grateful for the care they provided it was then that I made the decision to get us off the island so we could seek professional care.

“With the help of our local accommodation contact we took some antibiotic tablets and begged to get on the next flight out of the country. All went well until our stopover in Bangkok when we were medically grounded because of our injuries and not permitted to fly onto Australia.

“To cut a very long story short, we got our medical clearance, arrived back in Australia and then discovered our wounds were horribly infected as a result of the rudimentary medical care. We spent the next two weeks in Flinders Hospital Adelaide receiving skin grafts, undergoing plastic surgery and setting our broken limbs.

“As it transpired, my insurance didn’t cover any of our medical costs as it did not provide cover for the operation of a motor-scooter, unless I had a valid motorcycle license in my resident country. Even though I had a valid Australian vehicle license which was recognized in Vietnam I was not covered under the policy. It was an expensive and very stressful oversight.

“This is one of the reasons (that) I decided to start my own company.

“No Worries Insurance provides as standard, coverage for all motorcycles under 125cc providing the driver has an internationally recognised drivers’ license.”

Venning also warns of the flipside of insurance coverage where someone might be paying too much or paying for the same cover twice.

He concludes “in the case of legal liability in a bicycle accident covering property damage or personal injury to another party, most people would be covered for this by their existing Home and Contents insurance. Most other insurance companies aren’t going to highlight that fact.

“We endeavor to help our customers understand what insurance cover they already have and complement those with niche insurance products which covers what the companies don’t.

“Insurance is really just another business ... you’re calculating risk and managing it accordingly.

“I know there is a big market for our type of products and I know there are a lot of people like me out there who want to deal with a company that understands their needs.

“Although we’re only a few months old we’re soon expanding into other specialist markets such as camera equipment and musical instrument insurance.

“When it comes to insurance it’s definitely not a case of one size fits all.

“We provide insurance solutions for people who like to live life to the fullest. With Lloyd’s of London behind us our policy holders can keep on doing what they love with no worries about their insurance.”

Click here to view the No Worries Insurance entry in the Australasian Leisure Management Supplier Directory.