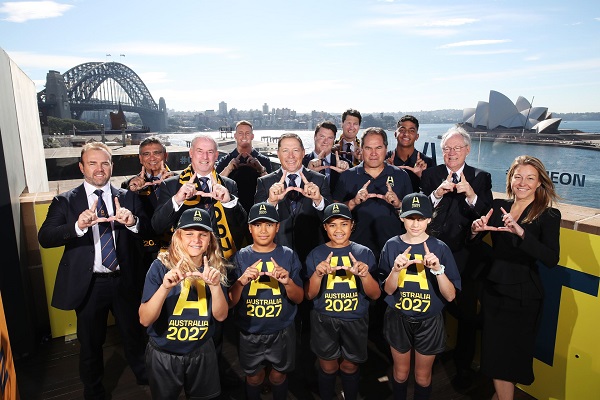 Predicting that hosting the 2027 Rugby World Cup would deliver a $2.5 billion economic boost with over two million fans projected to attend 48 matches, Rugby Australia has this morning formally launched its bid to host the tournament.

Launched in Sydney with the theme ‘Game On’, Rugby Australia Chairman Hamish McLennan stated that hosting the 2027 World Cup would be a “once-in-a-generation opportunity”, suggesting the tournament would feature 20 nations and 48 matches over seven weeks and be played at between eight and 10 venues.

Indicating that the tournament would deliver over 200,000 international visitors, McLennan stated “hosting Rugby World Cup 2027 is a once-in-a generation opportunity for Australia, which would drive substantial economic outcomes for our country, while also providing a lasting legacy for rugby in this region.

Rugby Australia is currently in a dialogue phase with World Rugby and will move into a candidate phase from June, when they will construct their detailed bid proposal. An evaluation phase commences in February 2022, with the WR Council voting on the hosts in May next year.

Wallabies’ World Cup-winning hooker Phil Kearns, Executive Director of the Australian bid, also stated “hosting Rugby World Cup 2027 would be a transformational moment for the game in this country and the Pacific, presenting an enormous opportunity to grow the game.”

Backing the bid, Federal Minister for Sport, Richard Colbeck added “the Government remains committed to making Australia the world’s most active sporting nation and reinforcing our reputation as a pre-eminent host of major sporting events.”

The Australian Government committed $8.8 million over two years in the 2020/21 Budget for Rugby Australia to develop a compelling and compliant bid. It had earlier provided $1 million in the 2019/20 Budget to support foundation planning.

Australia co-hosted the inaugural World Cup with New Zealand in 1987 and was sole host of the 2003 tournament, when the Wallabies were beaten by England in the final.

Bids are due for lodgement to World Rugby by 14th January 2022, with the announcement of the successful host expected in May 2022.