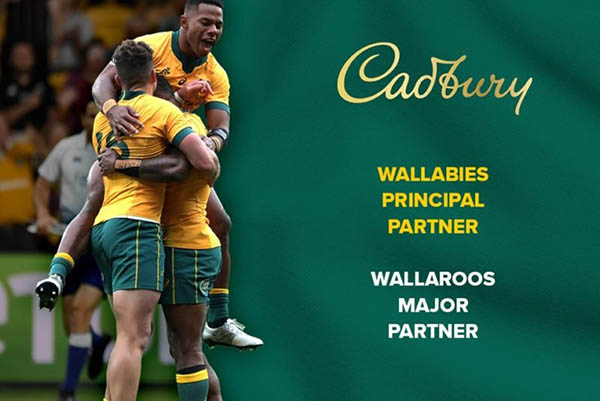 Rugby Australia have announced Cadbury as their new principal partner for the Wallabies, replacing Qantas as the jersey sponsor after 30 years. The five-year partnership also sees Cadbury as a major partner of the Wallaroos.

The partnership will see the Mondelez Australia-owned Cadbury logo on the front of the Wallabies jersey for test matches and on training apparel for the next five years. Along with this, the Cadbury logo will also be displayed on the back left of the Buildcorp Wallaroos shorts ahead of their two-test series against Samoa.

The Cadbury partnership will see the Qantas flying kangaroo logo replaced for the opening test against France at the Sydney Cricket Ground on Wednesday 7th July.

Rugby Australia Chief Executive, Andy Marinos enthused “what a fantastic and proud day for Australian Rugby. We’re incredibly excited to partner up with the team at Cadbury, and to see the opportunities for us both over the coming years.

“From the alignment on values to their commitment to the development of women’s sport, as well as increasing the opportunities and profile of the game, this partnership will only further encourage the growth of our game across all levels.

“I look forward to seeing our partnership grow over the coming years and witnessing its positive impact on our community."

Rugby Australia Chairman, Hamish McLennan echoed these sentiments, believing that the sponsorship was a perfect partnership between the two brands and added "just like the Wallabies, Cadbury are an iconic brand who have stayed at the very top of their game for generations. I want to thank them for joining us on this journey ahead.

“I have spent my life working with great brands and there is no better brand than Cadbury in terms of its values and its success, and they are perfect for Australian Rugby."

The partnership with Qantas is set to finish at the end of 2021, following the detrimental impact the COVID-19 pandemic on the airline.  When making the announcement in September last year, Qantas Chief Customer Officer, Stephanie Tully advised that while it was a difficult decision to make, it was the right one for the beleaguered business.

Tully noted “Qantas has had a very long association with Rugby Australia and the Wallabies, and we’ve stuck with each other during difficult times. Unfortunately, this pandemic has been the undoing. Like all Australians, we’ll continue to cheer them on from the sideline.

“In an environment where thousands of our people have lost jobs and thousands more are stood down while they wait for flying to restart, we can’t maintain these sponsorships in the way we have in the past.”

Mondelēz International President Australia, New Zealand and Japan, Darren O’Brien was honoured to be linking up with Rugby Australia, particularly ahead of the 2022 Women's World Cup in New Zealand.

O’Brien added “many Australians have a deep and long connection with Cadbury, which has been proudly made and enjoyed in Australia for 100 years. We look forward to building on this with Rugby Australia, by jointly creating many positive shared moments for Australians to be proud of, through local communities and at the elite level with the Wallabies and Wallaroos.

“We are particularly thrilled to build on our existing support for women in sport by supporting the Wallaroos in their ambitions to bring home the Women’s World Cup next year.

"We have great belief in the vision of Rugby Australia and support their plan for the game in this country, from the grassroots through to the international arena."