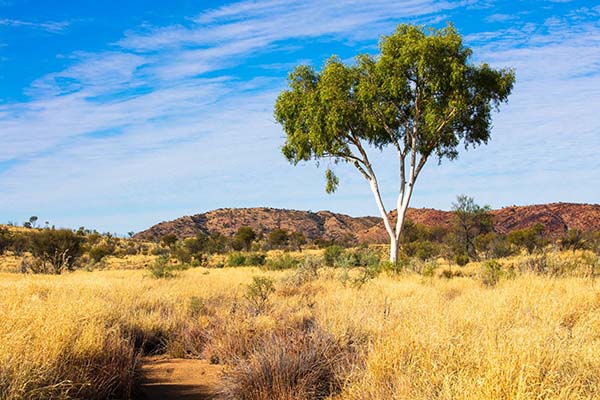 A just-released update of the International Union for Conservation of Nature (IUCN) Red List of Threatened Species reveals almost 25% of eucalypt species are threatened with extinction.

The IUCN report states that “of the 826 Eucalypts, comprising the Eucalyptus, Corymbia and Angophora species groups, 812 occur only in Australia.

“As keystone species, they define the landscape of the entire Australian continent, and are culturally significant to its First Nations People.

“Eucalypts including the Vulnerable Eucalyptus moluccana are the sole food source for the Koala (Phascolarctos cinereus), which has declined significantly due to loss of Eucalypt habitat.

The IUCN reports that Eucalypts in Australia face threats from human use of land, especially agriculture and urbanisation resulting in “population declines of at least 30% for 134 eucalypts, such as the Endangered Rose Mallee (Eucalyptus rhodantha), which has declined by more than 50%. Mining also threatens some restricted range species, such as the Critically Endangered Eucalyptus purpurata.

Critical habitat for conservation now remains in the areas between rivers and land, on roadside patches and in paddocks where lone trees often remain.

Established in 1964, the IUCN Red List of Threatened Species has evolved to become the world’s most comprehensive information source on the global conservation status of animal, fungi and plant species. The list is a critical indicator of the health of the world’s biodiversity. The IUCN Red List is regarded as the most influential source of information for species conservation in the world and is used to inform and guide key national and international policy and on-the-ground conservation decisions

The World Wide Fund (WWF) for Nature-Australia welcomed global attention being drawn by the IUCN Red List to the plight the eucalypt tree.

“It’s not just individual eucalypt species at risk. Entire forest ecosystems dominated by eucalypts are endangered. Some have been cleared down to less than 10% - or even 5% - of their original extent.

Blanch added “The bushfires have scorched large areas of eucalypts and we hope those forests are still alive and can sprout new leaves.

“There’s hope for eucalypts and other tree species if we take the right action now. That’s why WWF has launched our bold new strategy – Towards Two Billion Trees – which shows how Australia can save and grow two billion trees by 2030.”

Professor David Bowman, who studies the impacts of climate change and fire on trees at the University of Tasmania, told Guardian Australia that while eucalypts were ubiquitous in Australia, they were also vulnerable advising “I’m not surprised by this assessment. We are talking here about old ecological systems that are being taken to the edge.

“Eucalypts are keystone species and are critical to a huge number of ecological systems. If you start taking them out, then there will be knock on effects because so many organisms – birds and insects – depend on them. There are a lot of warning signs out there, and this is another one.”