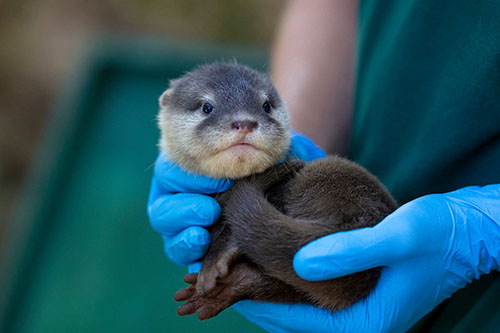 The birth of three rare otter pups at Perth Zoo in December 2018 sees the zoo maintain its success in otter breeding to help protect the vulnerable species against extinction.

The three otter pups were recently given their first hands-on veterinary check at Perth Zoo.The otter pups are the second litter born to Asian Small-clawed Otter parents, Paddy and Cerdik who came to Perth from international zoos to provide new genetics for the regional breeding program.

Zoo Keeper, Aaron Stanley, said: “The parents were bought to Perth Zoo in 2017 as part of a coordinated breeding program to help safeguard against extinction.”

“Every animal birth is exciting, but when we are part of a bigger program to help save a species it’s an even greater achievement.”

“Unfortunately, the Asian Small-clawed Otter is vulnerable to extinction. When people see them they often comment on how cute they are, but their looks are also a curse - it makes them a big target for the illegal wildlife trade,” said Aaron.

Visitors wanting to help otters are encouraged not to watch or share viral online videos of ‘pet’ otters.

“Stop and think about where those animals came from and when travelling use TRAFFIC, the wildlife trade monitoring network’s Wildlife Witness app to report any evidence of the illegal wildlife trade for further investigation,” said Stanley.

Otters are born with their eyes closed and are slow to develop, consequently they are tucked away from the outside world in their nest boxes for approximately 11 weeks post birth.

“Paddy however is a confident mother and secure with her environment, so she moved her newborns into a box right in front of a viewing window. Many Zoo guests had the very special opportunity to view the pups in their infant days, something rarely seen by humans.”

“We’ve also been sharing imagery on the Zoo’s Facebook page to help educate the public about these social carnivores,” said Stanley. “Paddy has been doing a great job feeding the young, but Cerdik seems to have missed the memo about being the provider, often stealing the extra fish for himself.”

The veterinary check involves a general health exam, checking their eyes, ears and teeth. It will also confirm how many males and females are in the litter.

Asian Small-clawed Otters are the smallest of all the species and are native to the rainforest in north-west India to south-east China, the Malay Peninsula, Indonesia and Sumatra.

They can be seen in the Asia Rainforest of Perth Zoo