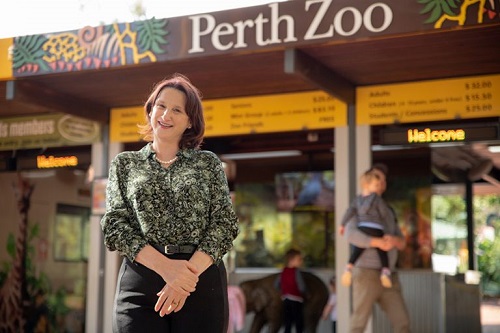 The Zoo and Aquarium Association (ZAA) has released a profile of Wendy Attenborough, the recently appointed Executive Director of Perth Zoo.

Appointed to lead the daily operations of the Zoo, reporting through to the Director General of the Western Australian Department of Biodiversity, Conservation and Attraction (DBCA), Mark Webb and the Zoological Parks Authority (ZPA) Board, Attenborough joined the Zoo after more than 10 years as an executive in the Western Australia Public Service.

Prior to joining the public sector, Attenborough worked for a non-government organisation in the Kimberley for almost 10 years, working with Aboriginal people on land related issues.

Prior to that, she started her professional life as a journalist and producer with ABC Radio, working in Western Australia, Victoria and the Northern Territory.

Explaining how having spent much of her childhood in the Pilbara, sparking a love of the natural environment, Attenborough told ZAA “I am delighted to be joining the Perth Zoo family.

“Having spent my childhood in regional areas, it wasn’t until I moved to the city that I realised the importance of zoos in introducing people to wildlife.

“I have a once in a lifetime opportunity to help guide an organisation that is world renowned for its efforts to save native wildlife and a much loved community icon in Perth.

“I am fortunate to be joining Perth Zoo at a very exciting time in (its) history.

“This year Perth Zoo turns 120 years old, and as we reflect on past achievements we’re also busily looking at what the future has in store. This includes working on future zoo design ideas to ensure we remain at the top of our field, from both an animal welfare and visitor expectation perspective.

“The recent amalgamation of Perth Zoo into the DBCA, alongside our colleagues at Parks and Wildlife, Rottnest Island Authority and Botanic Gardens and Parks Authority also offers us unique opportunities to share our skills in conservation science, community education and help enhance the awareness of WA’s stunning natural attractions as key tourism assets.”

With Perth Zoo holding a seat on the ZAA Board as a high contributing member, Attenborough will be taking on this Board position moving forward.