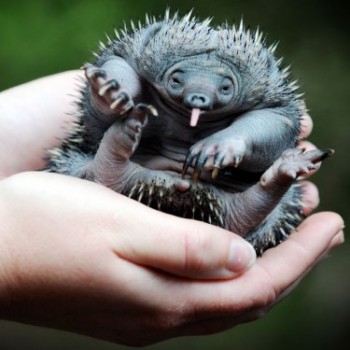 Speaking of the Zoo's achievements, Western Australia Environment Minister Bill Marmion said the puggles represented the first successful breeding from zoo-born echidnas and had rewritten the previously accepted facts on the reproduction age of echidnas.

Minister Marmion explained "the puggles were born to four-year-old first-time mothers Mila and Chindi both bred and born at Perth Zoo as part of its breeding program for Short-beaked Echidna.

"Until now, it was believed female echidnas did not breed until the age of five so these latest births have shed new light on echidna reproduction.

"This and other data gathered at Perth Zoo through video surveillance cameras, research and detailed record keeping is uncovering the secrets of echidna behaviour and reproduction.

"This in turn may help conserve the Short-beaked Echidna's endangered cousin, the Long-beaked Echidna, which is facing extinction in the wild in New Guinea.

"Only 24 echidnas have been bred in captivity in Australia and Perth Zoo is proud to have produced eight of these."

Perth's new additions, named Nyingarn (Nyoongar for echidna) and Babbin (Nyoongar for friend), are being housed off-display in the zoo's echidna breeding area. The puggles weighed less than one gram each when they hatched in August and spent their first two months in their mothers' pouch before being deposited in nursery burrows.

Minister Marmion added "keepers have been helping to rear young Babbin in recent weeks as the youngster was a bit slow gaining weight but it's doing well now.

"DNA testing of hair samples will be used to determine the sex of the latest additions. It is hoped they are males as the previous six echidnas born at Perth Zoo were all female."

For more information go to www.perthzoo.wa.gov.au