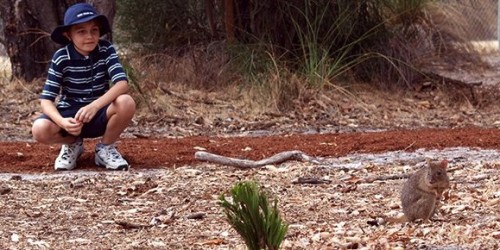 A unique, predator-proof conservation and education facility has been created at Whiteman Park, the popular bushland in Perth's northern suburbs.

Minister Faragher said the reserve was consistent with the Government's broad commitment to conservation and protecting endangered species which had also recently resulted in other translocation projects of endangered mammals around Western Australia, stating "Woodland Reserve will provide a breeding facility for rare and endangered fauna of the State, including the critically endangered woylie.

"Feral predators will be kept out by electrified fencing around the reserve, providing the animals with a safe habitat in which to live.

"This natural Banksia woodland will showcase the native flora and fauna of the region and provide the metropolitan area with a highly significant conservation and education facility.

"There are plans to reintroduce plant and animal species which are in decline to the reserve, which will make an important contribution to the protection and management of our flora and fauna."

Minister Day said this was an exciting phase in the development of Whiteman Park, which was officially opened in 1986 and is managed by the Western Australian Planning Commission (WAPC). Almost half of its area is retained for the conservation of wildlife.

He added "the opening of the Woodland Reserve marks the first step in the delivery of a new and challenging strategic agenda for Whiteman Park in the area of conservation.

"It provides a fantastic opportunity to engage, inform and educate the wider community about the issues affecting their local environment.

"Developments like this can help people understand the threats our environment faces and provide an example of how we can manage its long term sustainability for future generations."