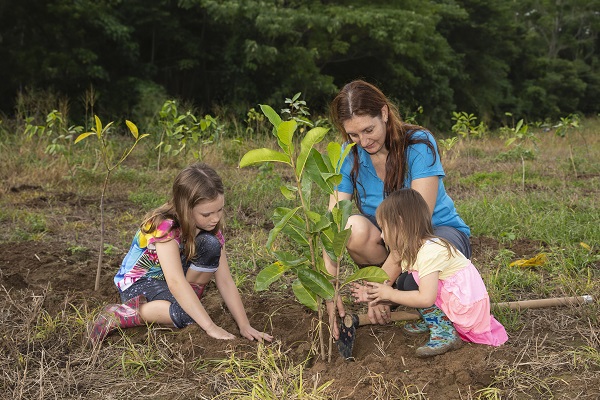 The trees are being planted to re-establish a vegetation corridor as part of the award-winning Redlynch Sport and Recreation Parklands Masterplan.

The project involves planting trees along the bank of Freshwater Creek, traversing seven hectares from Goomboora Park, past Glenoma Park and finishing at the Freshwater Creek crossing at the Cairns Western Arterial Road.

Over 40 native tree species, sourced from Council’s own Stratford nursery, are being used to revegetate the area which, until June last year, was a cane paddock.

Acting Cairns Mayor Terry James said it was a fantastic result for the community, commenting “when finished, this natural corridor will provide the community with another beautiful space to enjoy.”

Queensland Local Government Minister Stirling Hinchliffe congratulated the Council on delivering the revegetation project for the community, adding “this is a fantastic initiative and is exactly the type of project the Works for Queensland program is designed to support.

“The Queensland Government is proud to have provided $2.1 million from this program towards the implementation of the Redlynch Masterplan.”

Mayor James said special consideration was given when choosing the tree species for the revegetation project, concluding “the trees are native to the area, they attract birds, and provide food and shelter for native animals, and we are planting quite a few alongside the bike path to provide shade.”

The initiative has been backed by local group Treeforce whose volunteers are planting a quarter of the trees.