Ticketmaster Australia has announced that it has renewed its long-term partnership with Melbourne’s Marvel Stadium.

The relationship, which will ultimately span over 30 years, has helped to deliver best-in-class technology to the world-renowned stadium and every visiting fan.

Ticketmaster’s new digital ticketing system means that fans can buy, access and forward tickets in the easiest and safest way possible, all while meeting the safety requirements of the Victorian Government.

Marvel Stadium will have access to Ticketmaster tools that enable event operators to fine tune the logistics of their events with entry rate monitoring, contactless entry, SmartQueue, waiting list options, and more. These capabilities exemplify Ticketmaster’s ability to innovate rapidly, and the company’s foundation of digital ticketing enables the rollout of future upgrades and innovations regularly.

Commenting on the extension, AFL Executive General Manager Customer and Commercial, Kylie Rogers stated “the partnership between Marvel Stadium and Ticketmaster has been proactive in assisting our hirers, our tenant clubs and our members with enhanced products, always looking towards the future with innovative and industry-leading solutions.”

Ticketmaster Australia and New Zealand Chairman, Maria O’Connor added “we are extremely proud to have been in partnership with Marvel Stadium since the gates opened.

“Marvel Stadium is one of the world’s most innovative venues, and together we’ve sold more than 20 million tickets over two decades. We look forward to selling millions more and providing an even greater level of technology and support to the venue as events ramp up again and we welcome back fans to all forms of live entertainment.” 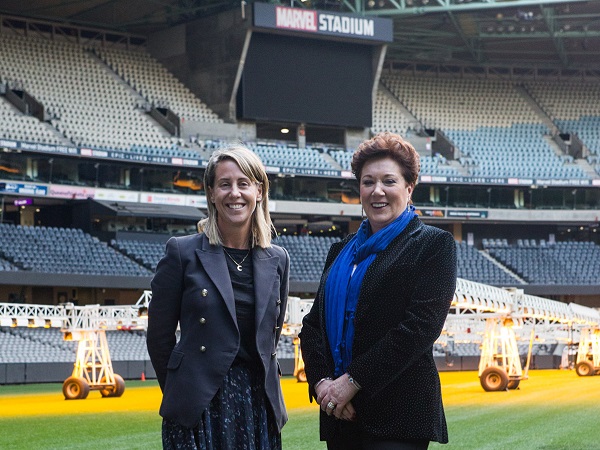 The renewal sits alongside Ticketmaster’s ongoing 15-year relationship with the AFL, with clubs continuing to utilise its targeted fan-focussed ticketing system. Over the years, the association has transformed the entire ticket buying experience for footy fans and clubs alike, with record numbers flocking to sign up with over one million members in 2019.

Despite the COVID-19 affected season, memberships still reached a whopping 992,854 in 2020. That continued into 2021, with over one million members signed up this year.

With Ticketmaster continuing to support the AFL in their decision to remove transaction fees for AFL, Big Bash and A-League matches, which will remain beyond 2021, AFL Chief Executive, Gillon McLachlan said the move has helped “give fans the best opportunity to enjoy a game of AFL football.”

McLachlan went on to note “Marvel Stadium hosts nearly a quarter of the AFL season’s matches, our pricing strategy with Ticketmaster removes a barrier and provides an immediate saving for fans.”

The Marvel Stadium partnership renewal announcement comes at the conclusion of another successful year in Ticketmaster’s ongoing relationship with the AFL.

With the 2021 AFL season interrupted by lockdowns around the country, Ticketmaster worked alongside Brisbane’s The Gabba, Perth’s Optus Stadium, and Tasmania’s UTAS Stadium, to deliver another successful AFL finals series, including a sold-out history-making Grand Final.