On the eve of its 2021 season, work has commenced on AFLW change rooms and an elite indoor training facility at Ikon Park in the inner Melbourne suburb of Carlton North.

With current match-day facilities seen as being below par, the project will see the demolition of the Pratt Stand and the construction of a match-day pavilion with AFLW-standard change rooms, an elite indoor training facility and better views into the ground from Princes Park.

The existing training and administration building will be refurbished and upgraded to provide AFLW and AFL players and staff access to the same facilities and resources, reinforcing a culture of gender equality throughout the club.  Lighting will also be upgraded to allow broadcasting of AFLW night matches.

Commenting on the project, Minister Pakula stated “prior to the pandemic, women’s football in Victoria was booming and with the anticipated return of community footy in 2021, that trend is set to continue.” 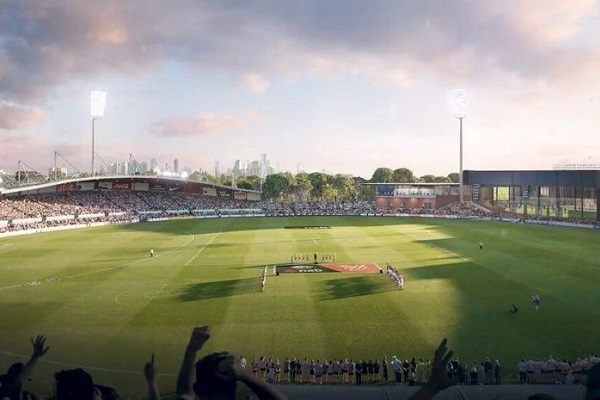 The Victorian Government has invested $20 million in the $42 million project, with the Federal Government providing $15 million and Carlton Football Club with support from the AFL contributing the remaining funds.

Welcoming the support, Carlton FC President, Mark LoGiudice noted “these new ground improvements will be a big win for the Blues and the entire AFLW community, giving us the facilities that players and fans deserve.”

The Victoria Government has a strong record of supporting women’s football, including providing $13 million for the second stage of the Moorabbin Oval redevelopment, $5 million for match-day and training facilities at Whitten Oval, $5 million to upgrade Casey Fields and $2 million to remake the Victoria Park change rooms.

The first-ever AFLW match in 2017 between Carlton and Collingwood saw a sell-out crowd of nearly 25,000 people at Ikon Park.

The 2021 AFLW season kicks off tomorrow night at Ikon Park with the Blues again hosting the Magpies.

Image: The first-ever AFLW match in 2017 at Ikon Park between Carlton and Collingwood (top) and the Ikon Park Masterplan (below).