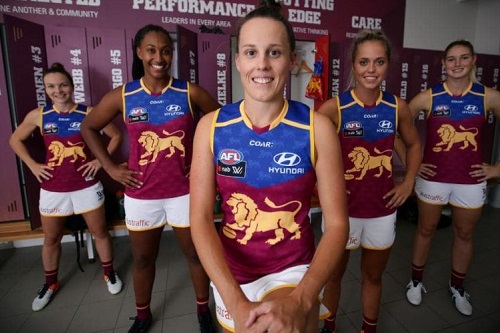 The Lions AFLW team has received a $15 million commitment from the Federal Government, with Prime Minister Scott Morrison promising to help provide their team home.

With just days before their AFL Womens 2019 season Round 1 opener against the GWS Giants, Prime Minister Morrison made the announcement in front of Lions players and staff, as well as AFL Queensland.

The funding will be used to build the Lions’ training and administration facility located in Springfield, to be known as ‘The Reserve’, which will also include a boutique 10,000 capacity stadium.

Announcing the funding, Prime Minister Morrison stated “to give women’s football, women’s AFL, a real shot in the arm, we’re announcing today $15 million for this wonderful project, The Reserve project, out at Springfield, which is going to be the new home of the Brisbane Lions women’s AFL.

Brock advised “it’s just going to change the game for us, we couldn’t be happier.

“To have all levels of government come together is amazing for what it’s going to do for women’s football in Queensland.”

“This announcement from the Federal Government means we can now start working directly with all levels of Government to take the project forward.

“‘The Reserve’ will not just provide a home for our AFLW team, it will also allow us space and resources to properly expand our Hyundai Help for Kids Academy so that it can cater to the exponential growth we are seeing in participation in women’s football.”

Construction of the facility will start this year, with completion in 2021.

The Lions executive team and football department have spent more than 60 hours in the design process with Brisbane architecture firm Populous.

The men’s team will continue to play and occasionally train at The Gabba while it has been claimed facilities at ‘The Reserve’ including the pool, gym, meeting rooms and auditorium will be available to the wider community.