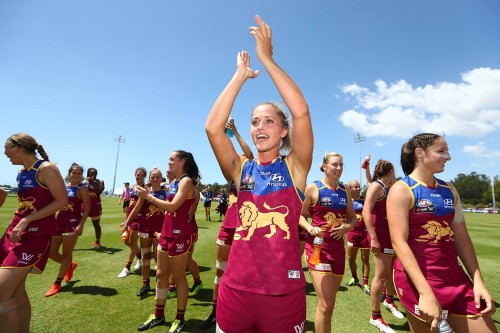 With the second season of the AFL Women’s competition now well underway, two Deakin University sport science experts say that there needs to be more support for women to take on elite coaching roles.

Dr Fraser Carson and Dr Julia Walsh are lecturers in coaching at Deakin’s School of Exercise and Nutrition Sciences, ranked the world’s number one school for sport science for the past two years.

Dr Carson has surveyed hundreds of coaches as part of his work in the school’s Centre for Sport Research, and says this opened his eyes to the lack of women represented in coaching roles.

He advised “over the past 12 months we’ve seen a phenomenal improvement in the amount of encouragement for women and girls to participate in top level sport.

“That’s not only by the AFL, but also with the establishment of the National Rugby League Women’s Premiership, and Australian women’s teams in cricket and soccer going from strength to strength.

“But there still seems to be little support to steer women to become involved in the coaching side. That’s where there’s a critical missing link.”

Dr Carson and Dr Walsh are currently working on a research paper examining the challenges women face in reaching leadership positions in what is an incredibly male dominated industry, particularly in a high performance setting.

Dr Carson explained “within the AFLW, there are only two women head coaches currently, Bec Goddard the premiership-winning coach at Adelaide, and Michelle Cowan at Fremantle.

“This is similar for the new VFL Women’s competition, and there’s even less representation at all levels of the men’s game.”

Dr Walsh said it was critical Australia didn’t suffer a repeat of what happened in the US when extra money poured into women’s college sports to bring them to funding parity with men’s.

Dr Walsh stated “while this did dramatically increase female participation on the field, nearly 50 years on, women in coaching roles with female teams have dropped from 90% to less than 40%.

“This is because women’s sport became perceived as a place for male coaches to cut their teeth and effectively gave men a dual pathway to gain coaching experience.

“But we need to ensure women have opportunity to gain experience in coaching positions across women’s and men’s sport, and we can’t just be happy with keeping women in assistant or team management roles. Women’s voices are good for everybody, it’s not just about ticking a box.”

Dr Walsh is a member of Deakin’s Women in Sport and Exercise (WISE) hub, which aims to increase women’s participation in sport through world-class research, as well as partnerships with the likes of the Geelong Cats VFLW team, the Deakin Melbourne Boomers and the Australian Diamonds.

She has coached both men’s and women’s basketball teams at the national level and said visibility was critical to encouraging more women to the coach’s box.

She adds “there’s a lack of role models and networks for women in coaching right now, and if you can’t see yourself reflected in that environment it makes it that much harder to navigate a pathway.

“We have pioneering women, but the numbers are small. And then you look at things like coaching courses where all the presenters are men, or coaching literature where coaches are represented in examples and imagery overwhelmingly as men.

“The sporting arena was designed by men for men, so we need to work hard to make some of those systematic changes that encourage women into coaching pathways and support them on the process.”

Dr Walsh said it was also critical we moved away from the stereotype of a coach as a straight, white male, of a certain age and class, because that narrowed the available talent pool, concluding “many women coaching in high performance settings feel they need to act like a traditional, autocratic male coach.

“Research shows that while an aggressive, autocratic coaching style might bring some short-term benefits, those fall away over the longer term.

“We know that coaching that empowers players and develops them as decision makers is the best way to bring out their full potential, so that’s what we should be moving towards.”

Image: The Brisbane Lions of the AFL Women’s competition.