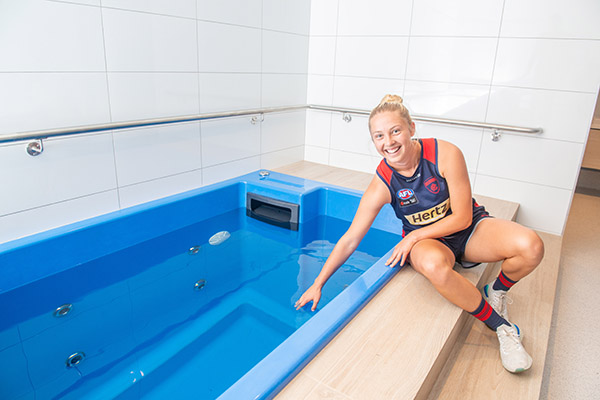 Casey Fields multi-sports complex in the City of Casey, south east of Melbourne, is set to reveal an $8 million upgrade to their female facilities. The upgrades follow a joint funding announcement from the State Government, AFL and City of Casey mid-last year.

The latest works include an upgrade to the ground floor of the pavilion, accommodating new female friendly change rooms, physio and medical training and rehabilitation facilities, a team theatre and an ice bath. A temporary canteen will also be erected and a team merchandising store will be opened.

These works are being jointly delivered through Sport and Recreation Victoria, which funded $5 million of the project, while Council contributed $2.5 million and the AFL, $500,000.

Stage one, which is already in use by AFLW and VFL players, will be officially opened in early February with Melbourne Dee’s AFLW team’s first home game of the season scheduled for Saturday 8th  February against North Melbourne.

City of Casey Mayor Cr Susan Serey said this was extremely exciting news for female athletes in Casey and demonstrated the steps Council is taking to increase female participation in sport.

Mayor Serey  added “I can’t wait to see the completed upgrades at Casey Fields, and I am excited about what this means for women’s sport.

“In being successful with this funding, Council has been able to deliver a much-needed facility that will foster more physical activity, and further embed sport within our community.

“These upgrades will provide much needed facilities for elite sportspeople while playing at Casey Fields, including our Melbourne Football Club’s women’s team.”

Following these refurbishments, works will continue for the next stage, which includes a building that will encompass the strength and conditioning centre and indoor training facility. This stage is expected to be unveiled mid-2020.