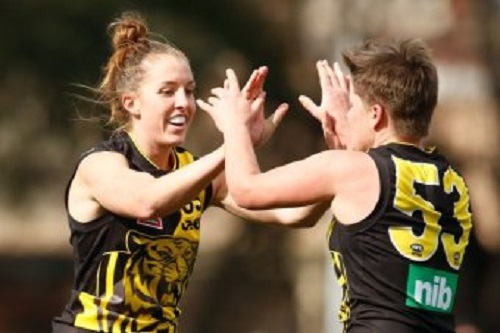 Newly released figures from Roy Morgan Research show that over 550,000 Australian women now play one of the four main football codes with the success of the AFLW driving this growth as participation in Australian football over the last year has risen by 21,000 to 176,000 female players.

The new research advises that despite the growth in female participation ‘Aussie rules’ the home-grown code remains well football, with nearly 400,000 Australian women aged 14 and over playing the round ball game in the 12 months to December 2018.

As Australia’s largest State, NSW is the home of female football players in Australia - with 207,000 women playing football of one sort or another, followed by Victoria with 139,000 and Queensland with 89,000. 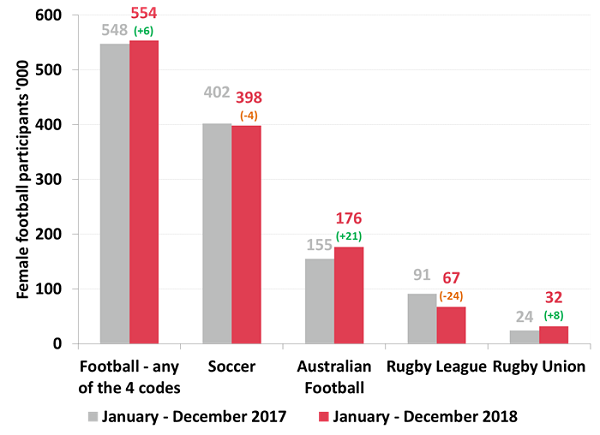 She advises “over 550,000 Australian women are now playing football of one sort or another whether Australian football, soccer (football), rugby league or rugby union. Although this number has increased by only 6,000 from a year ago the growth has been driven by an increasing number of women and girls playing Australian football, up by 21,000 to 176,000.

“As we showed a year ago it is the increasing participation of women and girls in the football codes that is supporting overall levels of participation in football as male participation has declined in recent years. However, despite these declines men still comprise over 70% of the over 1.9 million Australians that play a football code either regularly or occasionally.

“The success of the AFLW in engaging the interest of the community has been highlighted this week with the widespread support expressed for Carlton’s Tayla Harris after an iconic image of the AFLW player was targeted by online trolls. The swift response by media commentators and other social media users to condemn the harassment of Harris shows the growing influence and importance placed on Women’s sport as coverage and interest continues to increase.

“However, despite the impressive growth of the AFLW from a standing start just over two years ago, it is (football) that is by far the leading football code for women in Australia now played by just under 400,000 women and girls in 2018.

“The ... Matildas (have) has emerged in recent years as one of Australia’s favourite national sporting teams with striker Samantha Kerr scoring plenty of goals on the pitch and also inspiring women and girls to take up the sport.

“The Matildas and are now ranked inside the world’s top six heading towards the 2019 Women’s Football World Cup being held in France in June and July and recently won the 2019 Cup of Nations beating highly ranked opponents South Korea, New Zealand and Argentina.

“The increasing interest in women’s sport of all types including the football codes provides an increasingly lucrative platform for companies looking to capture a share of this emerging market while it goes through a significant growth phase.”