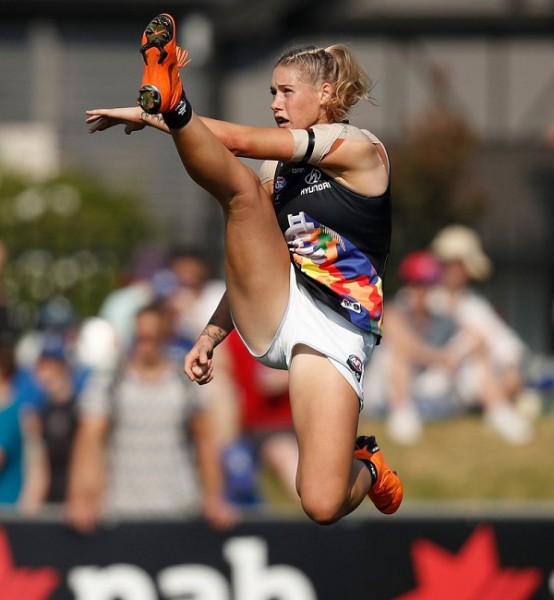 Online trolling of AFL Womens playler Tayla Harris in response to a picture of her taken during a match has been compared to "sexual abuse".

Harris was targeted with derogatory comments underneath a picture of her playing for the Carlton Blues that was posted on social media.

AFL writer Sarah Black told the Credit to the Girls podcast “it's abhorrent and disgusting, and it's constant.

"Some (comments) were harassment, some were just blatant misogyny."

Harris, who was pictured playing in her side's win over the Western Bulldogs, called on the AFL and the police to take action, saying it could be the start of "domestic violence and abuse".

Harris said on Instagram “my hamstring is OK but derogatory and sexist comments aren't."

Layton stated "I'm furious. I'm so proud of Tay for standing up. Enough is enough of this trolling. AFL, I'm asking you to stand up and not stand for this anymore."

The controversy has also raised the issue of how media companies moderate comments after Channel Seven deleted the picture in an effort to combat the trolling. The company reposted the photo after a backlash.

Seven, an AFL broadcast partner, apologised to Harris, saying the decision to remove the image from its Facebook and Twitter accounts "sent the wrong message", after initially defending the move.

The broadcaster says its intention was to "highlight" Harris' "incredible athleticism" and that they will "continue to celebrate women's footy".

AFL Chief Executive Gillon McLachlan called the abuse "unacceptable" but said the fault does not rest entirely on Channel Seven, given the challenges of moderating social media comments.

McLachlan added “these things happen, people do their best to monitor them and in the end, the self-regulation that's going on and accountability I think is what needs to happen.

"It's an amazing photo and that's the overwhelming consensus ... a great athlete at her most powerful, doing what she does."