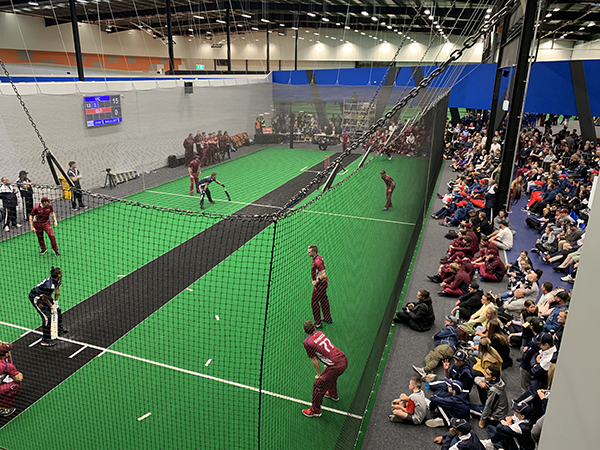 Following its $7 million refurbishment earlier this year, Casey Stadium officially opened in style with the recent hosting of the National Indoor Cricket Championships.

Hundreds of people visited the Stadium between 29th June and 13th July in order to take part in the large spectacle of the 2019 Indoor Cricket National Championships. With the refurbishment delivering five cricket courts including a remarkable show court, it proved to be an ideal location for the event.

Casey Stadium Manager Ian Jenkins was delighted at the success of the Championships and proud to have the state-of-the-art facilities at Casey Stadium on display, noting "having had conversations with coaches, players and officials throughout the fortnight, it was evident this is truly a world class facility. The City of Casey designed the facility to cater for local level through to elite sport and it is fantastic to see that coming to fruition so soon.”

Since the completion of the redevelopment, Casey Stadium has seen a spike in attendance, through the establishment of Indoor Cricket and Gymnastics. Prior to the expansion, the facility saw over 700,000 visitations annually with this figure anticipated to reach one million in the first year.

Casey Stadium saw 63 teams compete over 10 divisions, with over 600 of Australia’s best indoor cricketers going head to head for national titles. The Indoor Cricket National Championships are a truly inclusive event, featuring male and female divisions from Under 13s through to Open.

A key piece of the event is the Lord’s Taverners Shield which is a division for those with an intellectual disability, a division which has now been running for 13 years.

Senior competitions ran over the first week, concluding with grand finals and a presentation evening on 6th July. The presentations were a true celebration of the week and included announcement of the Australian squads and induction into the Hall of Fame.

Mayor Counsellor Amanda Stapledon, who was in attendance, highlighted how much value events such as this bring to the community and how privileged the City of Casey are to be hosting. A similar presentation night was held at the conclusion of the Junior competition with over a thousand people packing out the show court at Casey Stadium.

Ian Jenkins commented on how much of a privilege and honour it has been to work with Cricket Australia to deliver the championships, adding “Cricket Australia and Cricket Victoria have been heavily involved in the development of Casey Stadium - it’s fantastic to continue this partnership and deliver a successful event.”

Cricket Australia presented a plaque to Ian Jenkins at the presentation night to recognise the contribution of Casey Stadium in hosting the event.

While the Indoor Cricket National Championships has ended, the season continues for the Casey Stars with teams competing in the Victorian Superleague and the National Indoor Cricket League.

Click here for more information on the Casey Stadium.