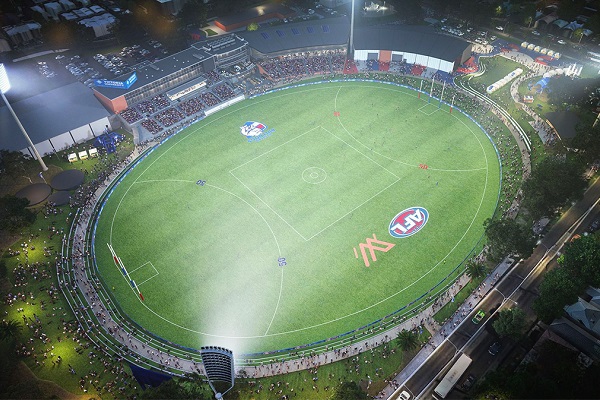 The Western Bulldogs’ plans for the $58 million stage two redevelopment of its traditional home at Whitten Oval are to proceed with the Victorian Government today announcing that it will contribute $36.6 million to the plan to build a new 1500-seat EJ Whitten stand with broadcast-quality lights.

Aiming to transform the precinct into a centrepiece of Melbourne’s west - as the home of an elite AFL club and a space for the community.

The plans also physical and mental health facilities for the community through the leading Sons and Daughters of the West program.

Announcing the funding, Victorian Minister for Tourism, Sport and Major Events Martin Pakula today stated “this project is a massive win for the people of the west and not just football fans, with the needs of the community central to the planning and delivery of the redevelopment.”

Beyond the Victorian Government funding, the Bulldogs will make a “significant” funding contribution, with Western Bulldogs President, Peter Gordon adding “we are very grateful to the (Victorian) Government for believing in the vision we have created for the future of the Whitten Oval precinct.

“Our ambition is to make the Whitten Oval precinct the heart of the community – an everyday precinct to spectate, celebrate and discover.” 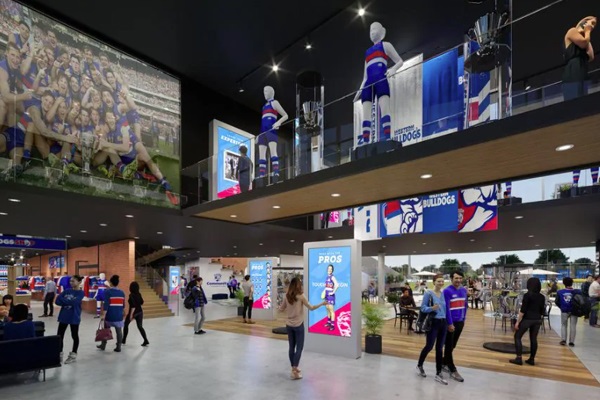 Documents were previously lodged with Maribyrnong City Council by planning consultant Urbis, on behalf of the AFL club, which detailed the stage two works which - to be split into two parts.

The venue currently hosts pre-season AFL, AFLW, VFL and VFLW matches, while Western United played an A-League game at the ground last season and is expected to play more there in the future. Currently, temporary lighting is required to boost the lux level for televised events.

A masterplan for the precinct was revealed back in May 2019 for a $150 million redevelopment of the West Footscray venue to return lower-drawing AFL games to the club’s traditional home by 2024, with a capacity of 18,000.

Features of this phase of the upgrade include the construction of a new three-level EJ Whitten Stand to replace the existing grandstand, including new change rooms and function space overlooking the ground, plus new broadcast-quality lighting.

The playing field will be resurfaced, re-sized and regraded, while the berms and terracing on the eastern and southern side of the ground will be improved and regraded. A new match day pavilion will also be constructed, providing permanent food and beverage and public toilets.

The existing foyer will be refurbished, and a new club museum built, while the existing advanced performance centre will be expanded, with new player and staff parking added behind it. 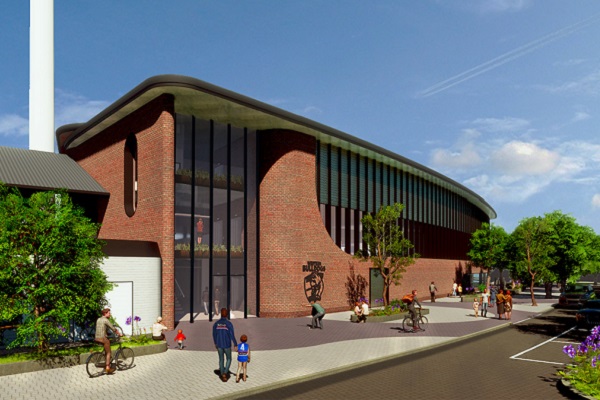 Later works will include relocation and integration of the AFLW change room facilities, a new indoor training field, additional landscaping works and a translucent canopy on the western façade.

Maribyrnong Council is due to make a decision on the club’s application by 19th November, with the club hoping construction can commence by mid-2021.

The Whitten Oval precinct redevelopment was initially made possible by a valuable parcel of land at the Geelong Road end of the precinct, which was transferred to the Club to enable a larger overall footprint to be developed.

The Victorian Government initially allocated $5 million towards stage one of the redevelopment, which was completed in February last year, included the upgrading of women’s football facilities and a new video scoreboard, while a further $1 million was allocated to the creation of detailed plans for future stages.

The Victorian Government has also announced that it will contribute $6.28 million to the Essendon Football Club has received $6.28 million in funding to complete the second stage of a $21 million development at its training base in Tullamarine.

AFLW and community facilities are the focus of the new development at The Hangar, with the club hoping to enter a team in the AFL Women’s competition as soon as 2022.

Images: Aerial concept for how the Whitten Oval will look when complete (top), the EJ Whitten stand's planned foyer and retail space (middle) and the new stand's exterior (below). Images supplied.

28th October 2015 - Skatepark at the heart of Maribyrnong River rejuvenation