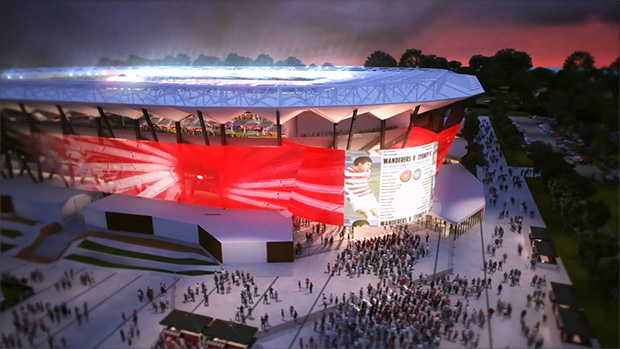 Populous has teamed up with National Geographic magazine to imagine a vision of the future for stadia design, exploring how technology will transform the spectator experience.

In the magazine’s July 2017 issue, the feature ‘Stadium of Tomorrow’ explains Populous’ vision for self-sustaining, highly connected and versatile venues that are more of an ‘eco-village’ of sport and recreation than a traditional sports stadium.

The vision capitalises on infrastructure required for sports stadia, creating multi-use, multi-experiential ecosystem with a plethora of sports and recreation opportunities ranging from traditional field sports such as athletics, football and ice hockey to non-typical stadium sports such as extreme sports, sailing, surfing and e-sports.

The vision extends as far as the stadium of tomorrow being a place where people live, work and play.

The desire for versatility has also inspired architects from Populous’ London studio to consider a fundamental rethink of how the playing field looks and works according to what sport is being played.

Employing an LED surface, the pitch changes textures and materials for different sports; from artificial turf for gridiron football to grass for football to wood for basketball.

The lines marking the area of play are projected onto the field, allowing the field to vary in size and shape and there is even scope to make the field transparent, opening up possibilities for an underground viewing area to enable fans to watch the action from a whole new angle.

Christopher Lee, Populous’ Managing Director EMEA, explains “the viewing experience within a stadium environment has not fundamentally changed since (Roman Emperor) Vespasian ordered the construction of the Colosseum (in Rome) almost 2,000 years ago.

“Technology and information technology is literally changing the playing field and providing an opportunity to create a new vision for both the experience of watching and playing sport but also for the role a stadium can play as a significant urban influencer.”

Lee sees that the Stadium of Tomorrow will also be highly interactive, employing LED technology and augmented reality to bridge the gap between the three participants in any sports event; the fan, the remote fan and the player experience. In the future, the crowd may be able to share their emotions through LED clothing or even experience what the players are feeling. Fans in smart-kit might feel the heartbeats of their favourite player or light up in colours to reflect the mood of the game.

National Geographic Senior Graphics Editor Jason Treat advises “stadiums have a long and interesting history, and each architectural innovation has changed the way people come together for large sporting and cultural events. This experiment allows our readers to see how architects and designers engage with how people use these spaces.

“It also gives us context for how problems are solved and pulls back the curtain a bit on how stadiums are designed, allowing our readers to see the process behind innovations that they could encounter in the future.” 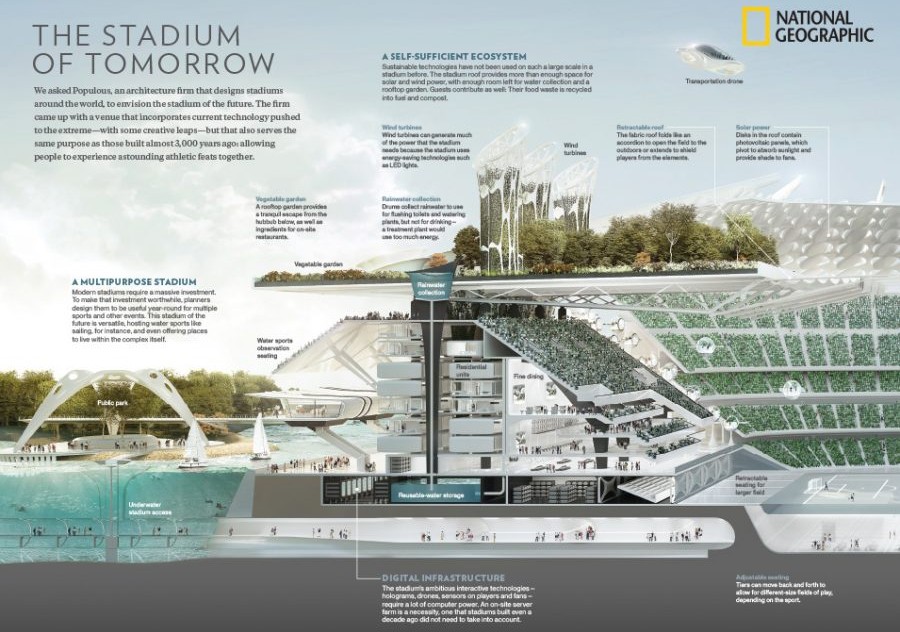 The stadium also envisions adding the best bits of TV sports coverage to the live, first-hand experience. A large holograph will hover over the field with the score and player stats, while smaller versions are literally displayed on the rear of seats for individual and tailored experiences for all spectators.

To deliver an effortless experience for all visitors to the stadium, Populous’ design predicts the rise of automated amenities including the drone-delivery of refreshments to your seat and the use of robots to serve food and drink and take rubbish away.

Automation will also extend to electro-magnetic hospitality pods that will move along rails within the stadium, allowing fans a view from anywhere they like.

Such ambitious interactive technology will require a step-change in the computer power a stadium will need at its disposal, meaning an on-site server farm is a necessity.

To sustain this level of digital infrastructure, the Stadium of Tomorrow will look towards creating a fully self-sufficient ecosystem. The stadium roof would provide space to institute sustainable technologies such as solar, tidal, wind power and kinetic energy harvesting electricity from the movement of the spectators on a large scale, with enough room left for water collection and a rooftop garden.

Guests would help: their food waste would be recycled via biodigesters into fuel and compost.

Populous Associate Principal Maria Knutsson-Hall added “the Stadium of Tomorrow envisions a stadium ecosystem that creates a sustainable vision that incorporates social, economic and environmental sustainability. It will create an urban superblock that not only forms 7-day-a-week sports and recreation opportunities, but generates a highly connected infrastructure and transportation hub where people live, work and play.”

LED lights also require less energy so wind turbines would be sufficient to generate the power that the stadium needs to operate.

Even the experience of getting to the stadium is transformed with those spectators that do not alight at a station within the stadium, via a high-speed train on magnetic rails, being delivered by drone directly to their seats. Other fans will have the option of travelling through an underwater tube for an aquarium-like experience.

The Populous concept also ensures fans that can’t be accommodated within the stadium will still be connected with the action via adjacent viewing towers that allow ticket holders to watch the game while enjoying an elevated tailgate party.

The towers will in turn inform neighbouring city dwellers of the progress of the game by pulsating with colours that vary depending on the crowd’s reaction.

Click here to view the full ‘Stadium of Tomorrow’ feature.

Images: Populous' design for the new Western Sydney Stadium (top) and the ‘Stadium of Tomorrow’ (below - courtesy of National Geographic).

19th May 2013 - THE EMERGENCE OF THE INTELLIGENT VENUE