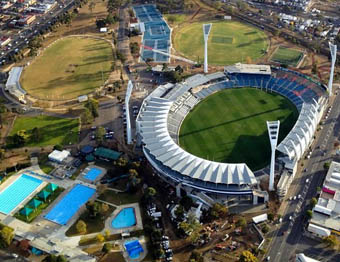 Global stadium architects Populous have been appointed as architect and project manager to coordinate the fourth stage four of the redevelopment of Geelong’s Simonds Stadium (Kardinia Park).

The architects return to Geelong as project manager of the redevelopment after also coordinating the installation of ground lighting in time for the 2012 AFL season.

The planned redevelopment includes the demolition of the venue’s ageing Brownlow and Jennings Stands, paving the way for a capacity increase to 36,000. This will strengthen bids by Geelong to host a range of major events, including AFL finals.

The Victorian Government has committed to establish a trust tom manage the Simmonds Stadium.

To commence following the 2015 AFL season, the Simonds Stadium Trust will be chaired by former Victorian Premier Steve Bracks.

19th May 2013 - THE EMERGENCE OF THE INTELLIGENT VENUE