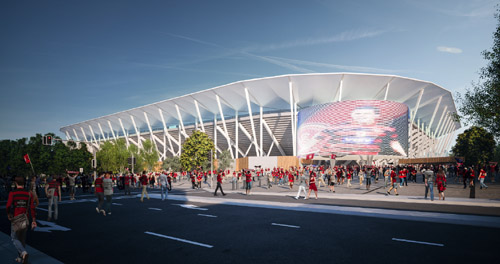 The NSW Government has announced that construction giant Lendlease has won the contract to build the new Western Sydney Stadium in Parramatta, in partnership with architects Populous and engineering firm Aurecon.

The new 30,000-seat stadium in Parramatta, which will replace Pirtek Stadium as the home of Parramatta Eels and Western Sydney Wanderers, is the first part of the NSW Government's $1.6 billion package to redevelop Sydney's stadia.

To be built at a cost of $300 million, the design will feature Australia’s steepest stands to ensure fans will be closer to the action than they are at any other stadium in the country.

Announcing that endlease had won the contract to design and build the venue, NSW Premier Mike Baird stated "we’re delivering the biggest investment in sporting and entertainment infrastructure since the 2000 Olympics."

NSW Minister for Sport Stuart Ayres added "the new jewel in the Parramatta crown, Western Sydney Stadium was designed with the entire fan experience in mind, featuring all the 'mod cons' like Wi-Fi and an activation precinct set to draw the crowds on game day. 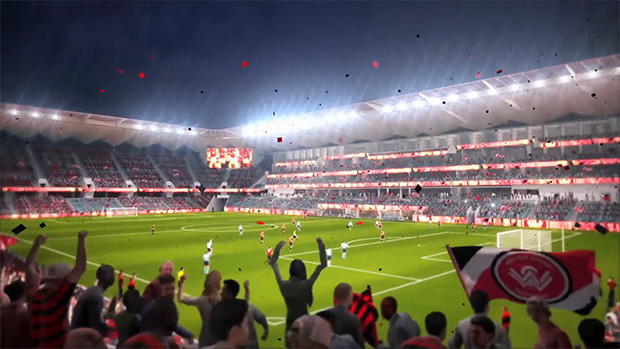 The new Stadium's precinct will provide pedestrian and public transport links and improved access to Parramatta Park and will feature a Gold LEED Energy and Environmental design rating.

However, the design will see the demolition of the Parramatta War Memorial Swimming Pool, with no firm plans yet revealed for a replacement aquatic facility.

In an effort to reduce any risk of the project running over time and budget, Infrastructure NSW set strict criteria for prospective bidders for the new venue. The tender opportunity was only available to contractors with an annual revenue of $1 billion or more for the past three financial years and a proposed lead designer who had designed an operational stadium in the past 10 years.