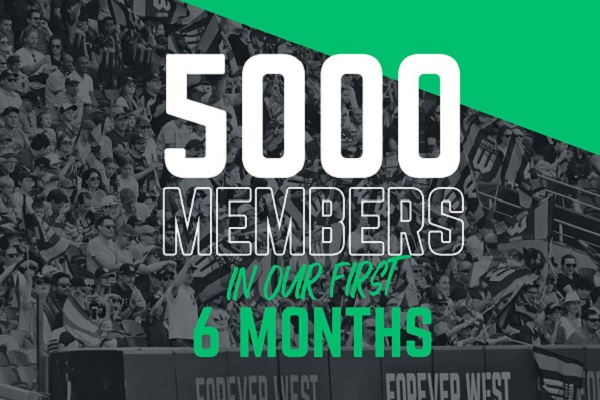 Western United Football Club has announced the attainment of a significant milestone with the 5000th member joining the A-League club after just six months.

Appropriately, with Western United having played its Round 19 Hyundai A-League match at Mars Stadium on Sunday, member number 5000 comes from Ballarat.

Welcoming the membership achievement, Western United Chief Executive, Chris Pehlivanis stated “I’m delighted and proud that our club has reached this membership milestone in our first season in the A-League and after just six months of going to market with our memberships.

“This achievement shows the strong connection we are building with our community across the West. I’m very proud of how this connection is growing stronger every day as evidenced by today’s milestone achievement.

“I’d like to thank all staff across the club who are working so hard to help build Western United, and every member who has backed their club.

“The passion and belief our fans have in the Green and Black is an inspiration, and I’m sure our memberships will continue to grow year on year.

“We are on this journey together, and today’s milestone is a significant achievement as we proudly represent our community on the national stage in the A-League.

“What’s more, to Mrs Beverley Ferguson of Ballarat, who today became our 5000th member, we warmly welcome you to the Western United family. I look forward to our club reaching the next membership milestone in the future.”