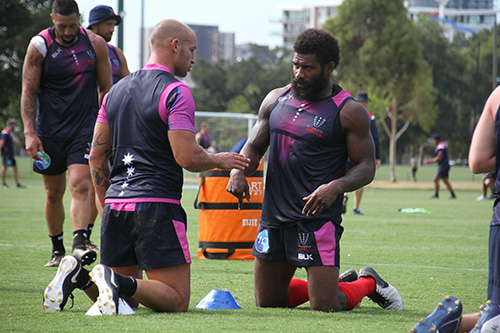 Leading innovations into the home training and playing fields at AAMI Park and Gosch’s Paddock are set to benefit Melbourne’s rugby and A-League football teams.

Behind the scenes while Melbourne Storm and Melbourne Rebels were on Christmas break, the clubs’ core training field was significantly upgraded; replacing 12,000 metres2 of turf and rejuvenating the soil beneath.

Director of Venues Shane Mates says that Melbourne and Olympic Parks is constantly looking for the next opportunity to grow the state’s sporting and recreation opportunities.

Mates advises "we recognise the vital role our precinct plays in achieving Victoria’s sport and recreation goals from the ground up."

"Our team strives to constantly raise the bar to best meet the needs of both elite athletes and all members of the public we’re proud to welcome every day of the year,’ said Mates.

Melbourne Storm Director of Performance Lachlan Penfold said the upgrade is important to how the squad prepares for NRL matches, commenting "it provides what we are looking for with our training activities - the correct level of hardness, a good cover of grass, and a surface which is even and well kept." 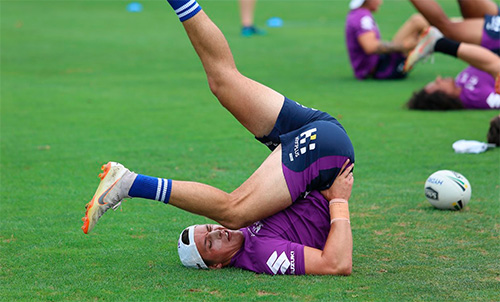 Melbourne Rebels and Wallaby Flanker Richard Hardwick said the new scrummaging surface has particularly impressed the players and returning to pre-season was like training on freshly-laid carpet, adding "the ground doesn’t tear up as much which makes for more competitive scrummaging sessions which the forwards really appreciate."

Roach concluded "I’ve had foot issues for a while now and there haven’t been any issues since the turf has been re-laid."

The new surface will also improve practice and playing conditions and significantly reduce water consumption. The turf which is tailored to Melbourne’s unique climate and is exceptionally drought tolerant, will build on the 19 million litres the precinct saved in 2018.

Melbourne and Olympic Parks’s horticulture specialists scientifically boosted the soil characteristics. This brings greater control for reducing potential injuries to those using the field, while also enabling nutrients to be locked in and harnessed by the root-system, rather than contaminating natural waterways.

The world class pitch planted nearly 18-months prior, offsite in Packenham, was developed to match the game-day conditions inside AAMI Park. The aim was to create a premium surface prepared to cope with wear and tear of both professional practice and recreation – repairing and recovering in record time.

The entire ready-play turf was then transferred onto the meticulously re-levelled and enhanced layers of earth at Gosch’s Paddock, which is uniform and robust as well as environmentally sustainable.

This follows the recent pitch renovation of AAMI Park last year after the stadium hosted Monster Jam, removing 20% of the turf surface to create space for new turf grass seed to be replanted and successfully rejuvenate the playing surface.