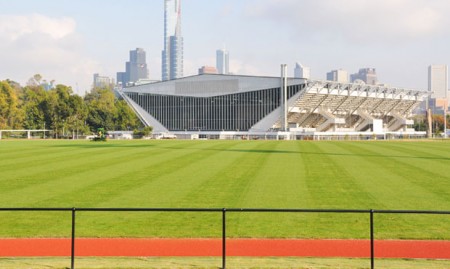 Community sporting clubs will be able to use Collingwood Football Club’s facilities under a new partnership between the leading AFL club and the City of Melbourne.

Lord Mayor Robert Doyle joined Collingwood President Eddie McGuire AM today (17th July) to reveal the City of Melbourne’s $3 million investment over 10 years which will give seasonal sporting clubs and community members within the municipality access to Collingwood’s gym, training and event facilities.

Lord Mayor Doyle stated “this agreement gives Melbourne’s grass roots sporting clubs access to Collingwood’s world-class sporting facilities and we are pleased to be able to make this announcement with Collingwood today.

“I congratulate Collingwood Football Club for their innovative and community minded approach to help us solve a difficult problem: quality, large scale space in a crowded municipality.

“Our research predicts that by 2031 there will be a shortfall of at least 10 Australian Rules football ovals within the City of Melbourne.

“We need to maximise community access to all levels of sporting infrastructure. Melbourne is known internationally as a sporting city, but we can only retain that reputation by delivering the facilities that people need.”

The partnership provides the City of Melbourne and community members with access to a range of facilities and programs at the club’s home base at Olympic Park, including the Olympic Park Oval, a new community gymnasium and theatre, meeting and function rooms.

McGuire advised that the Club was extremely proud of the partnership and the opportunity to support the City of Melbourne’s Active Melbourne strategy, which provides Melburnians with opportunities to participate in sport and recreation, explaining “we will work closely with the Council to promote healthy and active lifestyles, support amateur sports clubs and develop programs that align with other council recreation centres and have an emphasis on fitness and wellbeing.

“The opportunity to share in the promotion and development of sport and recreation for women in the precinct is also tremendously exciting.”

Chair of the City of Melbourne’s People City portfolio, Councillor Tessa Sullivan, said innovative partnerships were needed to meet future demand for sporting facilities, concluding “as our city’s population grows, demand for community facilities such as sporting grounds will only increase.

“The boom in women’s football and the inaugural AFL Women’s season has shown more people want to be involved in sport. At minimal cost, this partnership gives us access to top quality sporting and event facilities to meet the needs of our growing city.”