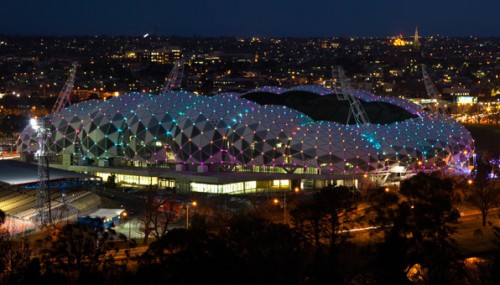 Tonight's A-League derby between Melbourne Heart and Melbourne Victory will see AAMI Park welcome its one millionth sports fan to the venue.

The iconic stadium which opened in May 2010 has held in excess of 70 events and has now reached the millionth fan milestone.

To mark the occasion, and to reward the passionate football supporters expected at the Derby, AAMI Park will be facilitating a FanCam image at half time. The 360 degree, 10 billion pixel image will allow fans to tag themselves at the game and share the experience through their social networks.

Victorian Sports Minister Hugh Delahunty said AAMI Park has cemented its place as the home of football and rugby in Melbourne, stating "AAMI Park is a magnificent venue to watch football and rugby, every seat has you up close and personal to the action, fans love the stadium and we are very proud to welcome this significant milestone- one million fans through the turnstiles."

Melbourne and Olympic Parks Trust Chairman Russell Caplan is delighted with the response to AAMI Park from the fans, adding "AAMI Park was built for the fans and they love it. The reaction from everyone who comes to AAMI Park - players, spectators, visitors is overwhelmingly positive. And the wider public has embraced the stunning roof design and the LED light sequences as an iconic part of our great city, adding to the reputation already held by the Melbourne and Olympic Parks Precinct."

On 29th February, the Socceroos will make their long awaited debut at the ground when they face Saudi Arabia in a FIFA World Cup qualifier.

For more information go to www.aamipark.com.au/fancam