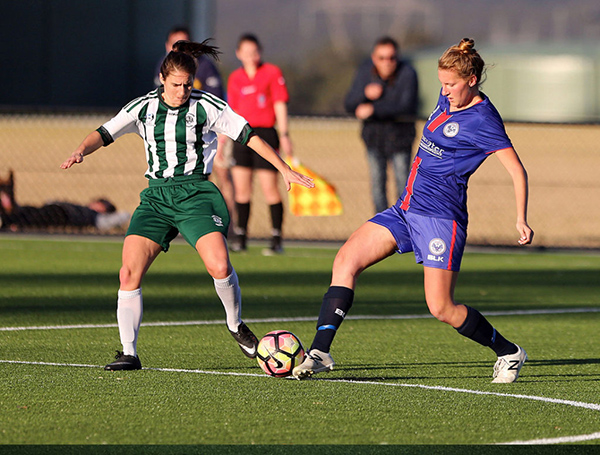 With Australia a potential host of the FIFA Women’s World Cup in 2023, the FFA Women’s Football Council has today released its 10-year Business Case for women and girls in football that outlines three major pillars and 17 change actions to transform women’s football in Australia over the next decade and drive significant investment in the women’s game.

Female participation in football grew 11% in the past year and reached 156,893 registered players and 300,000 total female player participants across the community. Football is the largest club-based participation sport in Australia with over 1.8 million participants.

Initiated and driven by the FFA Women’s Football Council, and funded and anchored by FFA, the Business Case was undertaken by Cast Professional Services and Minter Ellison.

80 respondents were part of the collaboration, from all levels of women’s football in organisations and associations, including FFA, the PFA and Member Federations, as well as, players, referees, coaches, club administrators, inspirational leaders and activists, nationally, internationally, and from across various sporting codes. The Business Case was also informed by global strategy from international football organisations, including FIFA, UEFA, the FA and CONCACAF.

The Business Case will be fully integrated with FFA’s long term vision and strategy, and recognises that women’s football is the game’s growth centre. It highlights the opportunities to continue growing the women’s game in Australia, the benefits this will have for the community and the eventual high return on investment it will bring.

Benchmarking, key performance indicators (KPIs) and tied, top-down funding are the hallmarks of a case for the business of women’s football that cascades from national team level to the professional and social leagues to grassroots.

To maximise outcomes for women and girls and ultimately achieve commercial viability of women’s football in Australia, the Business Case focuses on three major pillars:

FFA Women’s Football Council Independent Chair, Ros Moriarty notes “this Business Case is transformational and has the potential to bring commercial sustainability through growing women’s football in Australia. As we come out of the COVID-19 pandemic and potentially host the FIFA Women’s World Cup in 2023, now is the time to drive ground-up equality in football for women and girls.

“Football has achieved so much and will deliver so much more value to women and girls in Australia when it unlocks its full potential as a sport. The overwhelming enthusiasm and goodwill for women's football, the inherent flexibility in the game, and the immense progress women in the sport have achieved thus far, demonstrate the untapped opportunities women’s football presents in regards to player and community wellbeing, national pride, economic growth and international relations.”

The 17 priority initiatives put forward in the Business Case include supporting clubs to adopt best practices in welcoming and accommodating women, girls and families, increasing women in decision-making, elite coaching and refereeing roles, and committing to a plan to extend the W-League.

To achieve its three major pillars, the Business Case outlines specific KPIs to measure the timing and success of these 17 initiatives. These include doubling the number of women participating in football, achieving at least 40% representation on women on boards, groups and committees in FFA, Member Federations and in coaching and refereeing in W-League and WNPL games, and for our national team, the Matildas, to rank in the world’s top five teams.

FFA Chief Executive James Johnson advises “we were delighted that our ‘As One 2023’ Bid was ranked highest in the Bid Evaluation Report released last week, with an overall average score of 4.1 out of a possible 5 points. Women’s football deserves this investment because the return will be significant both to the sport and to the community – recent business case work on women’s football instigated by the Women’s Football Council together with FFA confirms this.

“The development of women’s football has never been more important to FFA, and we look forward with confidence to FIFA’s decision on 25th June, and to a bright future for the women’s game in Australia.”

Moriarty added “Women’s football is the game’s biggest growth area and this Business Case is the ideal framework to drive this growth. The Business Case is the result of extensive and collegiate information sharing and welcomes the participation of every person and group in Australian football who has a passion to see equality in football for women and girls.

“Ultimately it harnesses the power of football to transcend sport. This 10-year plan is not just about women’s place in football, it is about the place of women in society. This is the key to unlocking investment that will unlock the potential of women’s football.”

Key facts on women’s football in Australia (from Business Case):

• Over 7,700 girls and women are involved in football coaching across Australia.
• There are over 10,000 female volunteers within the Australian football community.
• Social football participation has grown by 30% in the past year and has 33,000 women and girls as registered participants.
• Participation by Indigenous and culturally and linguistically diverse (CaLD) women and girls doubled in 2018/19.

2nd November 2012 - About time for women in Australian sport