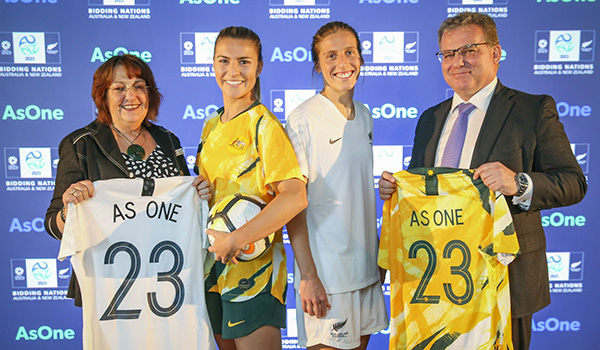 With the FIFA Women’s World Cup 2023TM inspection team having commenced its visit to Australia and New Zealand yesterday, Football Federation Australia (FFA) and New Zealand Football (NZF) are looking forward to demonstrating the vision and detail of their bid to co-host the biggest women’s event in world sport.

Throughout the inspection visit, the FIFA delegation will hear how the Australia New Zealand bid will deliver technical excellence at every level, with the players’ interests centre stage throughout the competition.

FFA and NZF have worked hand-in-hand to combine their strengths to host the first ever 32-nation FIFA Women’s World Cup in 2023. Australia New Zealand, with unified support from their respective Governments, promise to amplify women’s football in Asia and Oceania like never before, as both nations work together, ‘As One’, to deliver a truly inspired celebration of women’s football.

Played during the southern hemisphere winter, the tournament will provide ideal conditions for players and will be hosted at an optimal time for fans traveling from the northern hemisphere. Australia and New Zealand’s sport-mad and culturally diverse populations will ensure full stadia for every game and a record 1.5million spectators.

NZF President and FIFA Council Member, Johanna Wood, believes Australia New Zealand has produced a type of bid which has not been seen before noting “we are proposing a tournament of firsts as we would be the first ever co-Confederation hosted FIFA World Cup, the first co-hosted FIFA Women’s World Cup, and the first-ever FIFA Women’s World Cup within the Asia-Pacific region and the southern hemisphere.  Women’s football is growing rapidly and our two diverse nations are natural partners to FIFA in promoting equality and fairness.

“New Zealand Football and Football Federation Australia have produced what we think is a game-changing bid for the FIFA Women’s World Cup 2023TM. Our proposal puts the players at the heart of the tournament and we believe we will provide an opportunity to capitalise on the momentum the women’s game has generated since France 2019.

“Sitting at the heart of two neighbouring Confederations also means our bid has the potential to unlock the huge potential in women’s football in the Asia-Pacific region, while also guaranteeing strong financial return and a genuine legacy for the women’s game for FIFA.”

FFA President, Chris Nikou, believes that all stakeholders across the game are united behind the bid, while FFA’s experience of hosting the recent Asian Women’s Olympic Football Qualifiers demonstrate that FFA can be trusted to deliver major football competitions:

Nikou explains “State, Territory and Regional Associations, professional and grassroots clubs, players – the entire football community in Australia and New Zealand has come together to support this bid. The game is united in its quest to break new ground for football in this region.

“In recent days, the FFA overcame multiple barriers to deliver the Asian Women’s Olympic Football Qualifiers at short notice which demonstrates our ‘can-do’ attitude and partnership approach with the wider football family. This inspection visit is an opportunity for us to further demonstrate both the technical strengths of our bid and also the wider game-changing vision we have for the FIFA Women’s World Cup.

“I am confident that our team will show the FIFA delegation how our two special countries have come together As One to provide a platform for grassroots and professional players, officials and fans alike to grow the game throughout the Asia-Pacific region.”

The FIFA Council will award the hosting rights in June 2020.