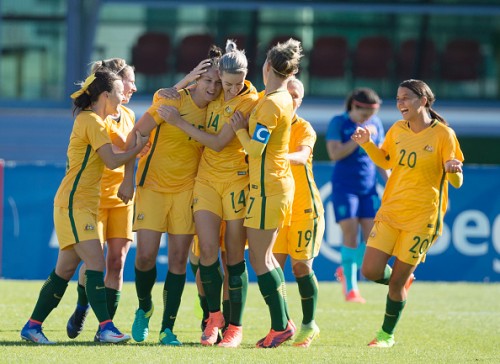 The Westfield Matildas and star player Sam Kerr were the big winners with fans at the AIS Sport Performance Awards in Sydney last night.

Riding a wave of success, the Matildas were voted the Public Choice Team of the Year ahead of NRL premiers the Melbourne Storm, AFL champions the Richmond Tigers and the Australian Diamonds netball team. The online poll, run in partnership between the AIS and ABC Grandstand, attracted almost 19,000 votes from fans.

Accepting the Team of the Year award on behalf of the Westfield Matildas, star striker Lisa De Vanna was ecstatic and proud, commenting “to have a nation vote for us as the team of the year against some of the great sporting teams of Australia is fantastic.

“I have been around for a very long time and it used to be 400 of our friends and family that would come watch us.

“Now we have thousands of people wanting to watch us and engage with us and that is because we play good football.”

The Westfield Matildas Head Coach, Alen Stajcic was also recognised by an AIS panel of experts as Coach of the Year.

Stajcic was humbled to receive the prestigious personal award but was also very proud of his team’s achievement, stating “to have received this kind of recognition and respect from the Australian public is unbelievable.

“To know that our team has had this kind of cut- through in the Australian sporting landscape is just mind- boggling.

“To think that we have had 50,000 people come and watch us in Australia over the last few months shows that we have made great steps.”

FFA Chief Executive David Gallop was at the gala event and paid tribute to the achievements of the Westfield Matildas along with Kerr and Stajcic.

Gallop advised “(this is) incredible recognition for Alen (Stajcic), Sam (Kerr) and the Westfield Matildas tonight.

“There has been a lightbulb moment in Australian sport for female sport, and the trailblazers for that have been the Matildas.

“With Alen in charge and players like Sam we can genuinely be world beaters in the next 12 to 18 months.

“It’s also testimony to the business decisions that we have made to invest resources in the Matildas because what they have achieved is good for football not only women’s football.”

The Westfield Matildas were finalists in six award categories, including Best Sporting Moment of the Year for their historic victory at the Tournament of Nations. The Best Sporting Moment, voted on by national media, was taken out by world champion boxer Jeff Horn for his underdog victory against Manny Pacquiao.

Almost 400 guests gathered at The Star in Sydney for the black tie function to celebrate the year in Australian sport, also highlighted by achievements in winter sport and women’s sport.

Image: The Matildas were voted the Public Choice Team of the Year at the AIS Sport Performance Awards.