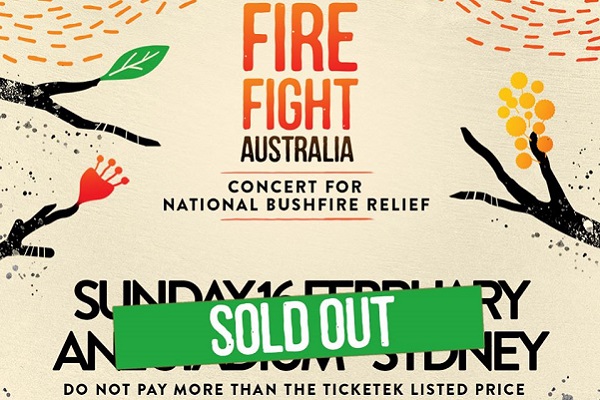 The organisers of the Fire Fight Australia bushfire relief concert scheduled to be held at ANZ Stadium in Sydney on Sunday 16th February 2020 have advised that tickets for the event have sold-out within 24 hours.

Having announced a line-up featuring the likes of Queen, Tina Arena and Olivia Newton-John, more than 70,000 people are set to descend on ANZ Stadium next month to raise money for the Australian bushfire relief effort.

Welcoming the response to what will be anine-hour concert, organisers advised that the sell-out demonstrated a "heartwarming display of unity and solidarity during times of national hardship".

The concert will be compered by comedian Celeste Barber who has made global headlines in recent weeks thanks to raising more than $50 million for rural fire services - the largest social media fundraiser Facebook has ever hosted.

"She is great with the quips and the dialogue that will bring another dimension to the day. She will be the glue to get through the day and night."

Mindful that the sold out event may well attract ticket scalpers, TEG has warned “do not play more than the Ticketek listed price”.

The current catastrophic bushfire are also inspiring other concerts to raise money for bushfire relief efforts.

Smaller-scale concerts are also in the process of raising hundreds of thousands of dollars. In Melbourne, a massive comedy fundraiser at St Kilda's Palais Theatre featuring Hannah Gadsby, Wil Anderson and Dave Hughes has raised more than $200,000. Organisers advised that tickets sold out within 10 minutes.