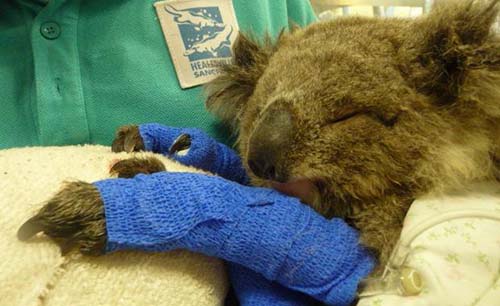 10 years on from the Black Saturday bushfires of February 2009, staff and volunteers at Healesville Sanctuary gathered to mark the anniversary and plant a Manna Gum, a symbol of regrowth, next to the Remembrance Tree outside the Australian Wildlife Health Centre.

The Black Saturday bushfires of 7th February 2009, a series of bushfires that ignited or were burning across Victoria,  were the most devastating bushfires in Australia’s history. Tragically, 173 people lost their lives, 414 were injured and over a million wild and domesticated animals were lost.

The Black Saturday bushfires had a profound impact on Healesville Sanctuary, their people and their animals. Their staff worked tirelessly to evacuate the Sanctuary’s treasured animals and to help and treat the many native wildlife patients that came to them with injuries and in extraordinary amounts of pain.

Healesville Sanctuary pays tribute to those in their team and the local community who were greatly impacted by the events on Black Saturday.

Image of the koala, Amelia Fritz, who received treatment over many months from the Australian Wildlife Health Centre at Healesville Sanctuary