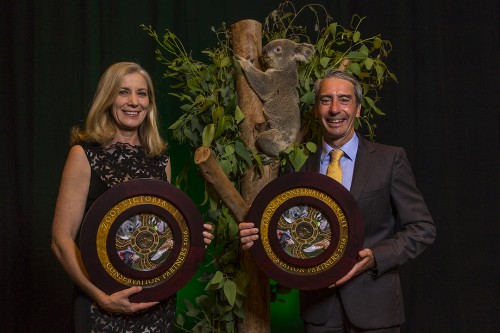 Zoos Victoria has been honoured for its fight against wildlife extinction by being awarded the prestigious San Diego Zoo Conservation Medal at a ceremony in the United States (held overnight).

The medal was awarded to Zoos Victoria for its work to help save 20 of south eastern Australia’s most threatened native species from extinction and for its campaigning efforts on issues such as palm oil and its impact on orang-utan habitat.

Dr Gray stated “much of our conservation work is focus on native species, and most importantly Victorian species.

“We believe it is so important that we care for the little known, but highly threatened species in our backyard first.”

“We also strongly believe that we have a responsibility to the species that are represented in our zoos, and to ensure that we work with our millions of visitors to stop the threats that we pose to them in the wild.”

“This award is a great honour not just for the team at Zoos Victoria, it is also a testament to the many local groups and land managers with whom we work as well as our Victorian Government partners.”

Since 1966, the Conservation Medal has recognised world leaders and organisations who share San Diego Zoo Global’s vision to end extinction. Past winners include Sir David Attenborough, Jane Goodall and UK royal The Duke of Edinburgh.