Back to Supplier Directory back

Developed in Europe, this innovative system offers a safety management solution for swimming pools that checks individual swimmers via their wristband - monitoring their depth and time.

Sensors mounted on the pool wall monitor if a wristband wearing bathers are approaching preset limits for depth and time and, if the user is spending too much time under a pre-set depth the wristband issues a wireless alert via radio and/or ultrasonic transmission to an alarm control unit.

The wristband alarm sounds and the LED lights flash, prompting the swimmer to return to a safer location.

If they fail to respond appropriately, the unit issues a full alert to supervisory staff - a feature which reduces 'false-positives', a major problem with many alarm systems.

The SenTAG control unit manages the overall system with an easy user interface while also keeping controlof all systems components including sensors, electronics and output and input units. 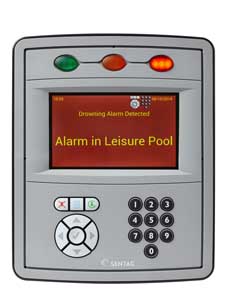 When the alarm is confirmed by the control unit, it alerts by light, sound and display information.

The SenTAG also represents a low cost anti-drowning safety alert system that meets extensive recommendations made by the Queensland Coroner at the conclusion to the inquest on the drowning death of a child at the Rockhampton Rock Pool Water Park in 2007.

The inquest saw the Queensland Coroner recommend that Workplace Health and Safety authorities should implement an anti-drowning safety alert system at public pools.

SenTAG is intended for use at in pools of all types including Council and private sector aquatic centres, waterparks and in school, club and hotel environments.

Hartley sees that it will provide a vital safety addition for unsupervised pool environments in hotel and resorts, as well as in residential locations, believing “the new wristband device is set to significantly reduce drownings and near-drownings, particularly among children who are most at risk.”

• Supervises every swimmer individually with personally adjusted settings
• Communicates via ultrasonic frequencies
• Registers depth, time and lack of ‘motion’ (depth changes) below the surface and does not relay on line of sight within the facility.
• Continuously monitors status and alerts staff if system capacity is reduced.
• Uses retention units to collect the SenTAG security wristbands after use.
• Has low operating, maintenance and support costs.

• A wristband that continuously monitors the user while in pool areas.
• A wristband with personal settings independent of the type of user, a child, an adult, an elderly, or perhaps a person with reduced physical or medical abilities.
• An assurance that if there is an emergency while in the pool the SenTAG wristband will alert staff.

• A higher level of security - due to the human factor and a very demanding environment within bath facilities, human surveillance can never be 100%.
• Increases the level of security and reduces the risk of missed incidents. The SenTAG system alerts staff in shortest possible time and by doing so also reduces the risk of permanent injuries due to a drowning or a near drowning accident.
• Continuous monitoring of all pool areas within your facility.
• Easy integration with entrance and access system using the RFID chip that is included in the SenTAG wristband.

See all news see all

90 people - mostly men and including eight pre-school children - drowned in New Zealand in 2014. The number is trending down - 107 people died in 2013 - but New Zealand remains one of the…