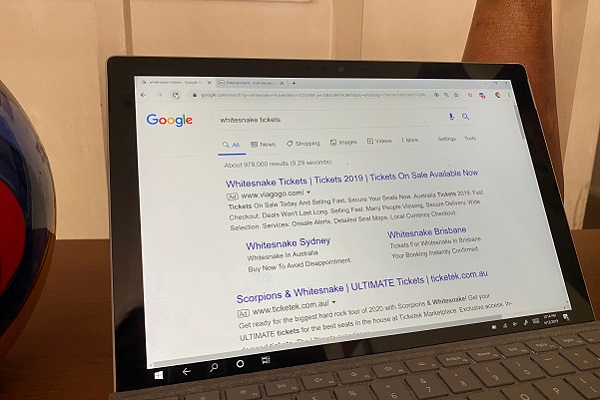 With Viagogo appearing to once again be advertising on Google, Live Performance Australia has sought urgent clarification from the search engine giant about the terms by which the controversial reseller has been allowed to resume promoting its online ticket resales.

In July, Google announced that Viagogo had been suspended from its Ad Words platform worldwide after ruling the controversial ticket resale site was in breach of its advertising regulations.

However, while neither business has made a public announcement on the apparent reversal of this decision, Viagogo advertisements have again appeared during searches over recent days.

Richardson advised “our industry has been calling out Viagogo for its misleading practices for some time now, and it has also been subject to Federal Court action by the ACCC.

“In April this year, the Federal Court found that Viagogo had made false or misleading representations and engaged in conduct liable to mislead the public when reselling entertainment, music and live sport event tickets. And, yet, only months later it is back in action on Google.

“I have today written to Google’s Australia and New Zealand managing director, Melanie Silva, seeking an urgent clarification of the commitments that have been given by Viagogo around its business practices and how these conform with the standards Google expects of its advertisers.

“We have also sought her assurance that consumers who commence their ticket purchase journey through Google can expect the full protections afforded by Australian Consumer Law.

“Australia’s live performance industry wants some answers from Google on its turnaround."

Viagogo has started advertising again in Google search results after having been suspended in July following
concerns about its misleading advertising practices.https://t.co/PTAjrlKCHI

Noting comments from leading industry figures that the problem of invalid tickets being presented at venues had fallen off since Viagogo was stopped from advertising on Google, Richardson added "consumers beware. Viagogo has form, and we have grave concerns about its business practices.”

Richardson said consumers who purchased through resale platforms should be aware of their rights under consumer law and utilise credit card chargebacks to claim refunds for tickets that were not provided, or rejected at venues.

The reappearance of the advertisements would appear to result from the United Kingdom's Competition and Market Authority (CMA) being satisfied that, after a series of changes, the controversial reseller is now compliant with UK law.

Last week, the Switzerland registered business advised that it was buying rival StubHub in a US$4 billion deal - the biggest ever transaction in the secondary ticketing market.

In Europe, anti-scalping campaign group FanFair Alliance has formally called on the CMA to conduct an investigation into the acquisition.