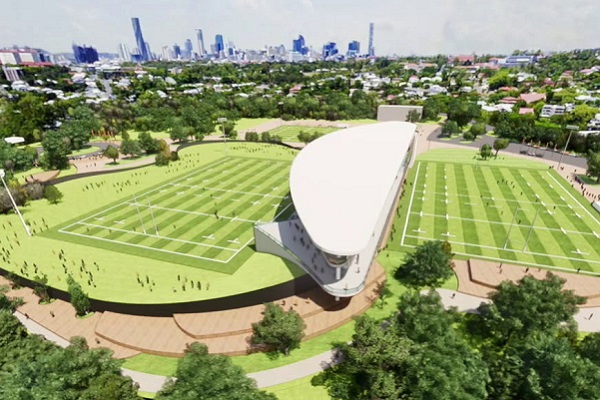 The redevelopment of historic Brisbane sports ground Ballymore appears assured with both the incumbent Labor Government and LNP opposition committing funds for the project in the lead up to this weekend’s Queensland election.

Following Labor’s restatement of an earlier commitment of $15 million to the project on 13th October, the LNP yesterday matched the funding pledge that would see Brisbane rugby's heartland become the home of the Wallaroos.

With $15 million in Federal Government funds already committed, the plans for a National Rugby Training Centre (NRTC) and new McLean Stand at the venue can now proceed.

The $30 million high-performance centre will be the new national headquarters for women’s rugby, including the national Wallaroos side, as well as a training base for the Queensland Reds men’s and women’s sides and other Queensland programs.

The venue could host multiple sports if Brisbane's 2032 Olympic bid is successful and also bolster Australia's 2027 Rugby World Cup hosting hopes and act as a training base for the Wallabies or touring Test nations.

Welcoming the funding, Rugby Australia Chairman, Hamish McLennan stated “rugby in Queensland is incredibly strong, with growth in all forms of the game.

"The NRTC is an exciting project, providing a world-class facility with warmer temperatures as the new home of the Buildcorp Wallaroos."

The National Rugby Training Centre
The NRTC has been designed by Michael Rayner of Blight Rayner Architects, who are also responsible for the New Performing Arts Complex (NPAC) at Southbank.

It will feature an integrated 3010-capacity new McLean Stand, replacing the existing stand which was first built in the 1968 and extended in the 1970s. This will allow for continued Premier Rugby finals, representative matches and other events such as Wallaroos Tests.

Spread over almost 4000 square metres, it will feature changerooms for up to 100 men and women and house cutting edge sports science and recovery facilities.

Brisbane-based RPS are project managers, with construction expected to commence in mid-2021.

Image shows the concept for the redeveloped Ballymore.