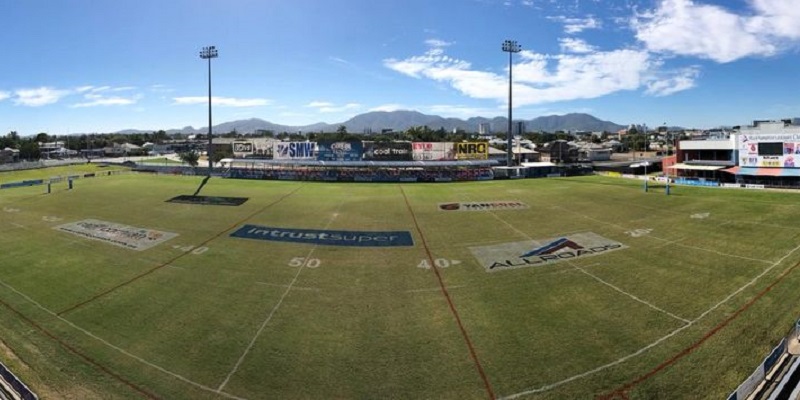 The announcement comes just a week after One Nation Federal Senator Pauline Hanson presented a novelty cheque for $23 million from the 'Australian Federal Parliament' for a new 8,500-seat rectangular sports stadium to be built on a flooding prone site adjacent to the Rocky Sports Club.

Queensland Premier Annastacia Palaszczuk said the Central Queensland Regional Recovery Action Plan funding will deliver the first phase of the Browne Park redevelopment, which in time would enable the ground to stage NRL games along with concerts and performances of international significance.

Introducing the funding, Premier Palaszczuk stated “COVID-19 continues to devastate lives and economies around the world.

“But because of Queensland’s strong health response and strong borders, we are on the path to recovery - and we’re seeing that here in Rocky.

“Accommodation bookings here are up 17% on what they were a year ago, and Brisbane to Rockhampton is one of the ten busiest flight routes in Australia.

“We know that to maintain that economic kickstart, we need to invest in construction and invest in jobs.

“Since the pandemic struck, my government has announced $8 billion in measures as part of Queensland Economic Recovery Plan to support Queenslanders’ health, Queensland jobs and Queensland businesses - and there is more to come.

“My government has a clear plan to drive Rockhampton’s economic recovery and Browne Park is an important part of that strategy. 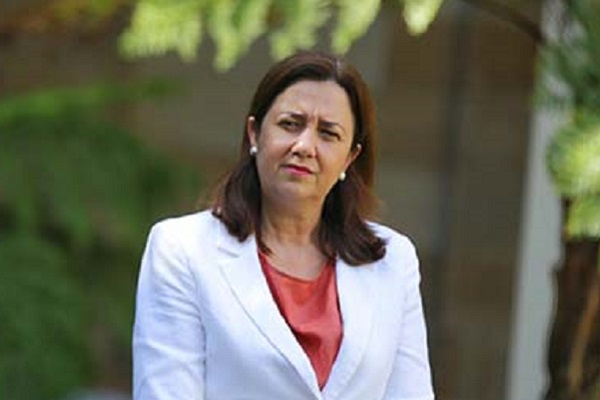 Advising that the first phase of construction could create around 60 jobs, Member for Rockhampton Barry O’Rourke stated "we live in rugby league heartland.

“Rocky is an NRL nursery and we want the NRL to give something back to Central Queensland for the stars we’ve produced over the years.

“At the moment, Browne Parke is not big enough to attract high-profile events, so we miss out.

“Today we outline Stage 1 - a rebuild of the western-side Jack Crow Stand to offer nearly 4,000 seats - and commit to a Master Plan that adds seating and facilities to the Albert and George streets sides in later stages.

“The end design allows - through contemporary construction - to design for more than 9,000-plus seats being achieved without having to close off Murray Street.”

Queensland Treasurer and Minister or Infrastructure and Planning Cameron Dick said the Browne Park redevelopment was a vital part of the Central Queensland Recovery Plan.

He added “through COVID-19, we know that the traditional industries of Central Queensland like agriculture and mining have been among Queensland’s strongest,” he said.

“We need to continue building of the momentum from investments like Rookwood Weir and upgrades of the Callide and Stanwell power stations.

“That’s why we are working in partnership with the local community, Central Queensland businesses and industry to deliver initiatives that grow the region and create opportunities for the future.”

Call for investigation over Senator Hanson's funding announcement
Following last week's announcement of Federal Government funding for a new sports stadium at the Rocky Sports Club, announced by Senator Hanson, Federal Labor has written to the Auditor General asking him to investigate how she came to use a novelty cheque with her face on it to announce taxpayer-funded grant.

In a letter sent on Friday, Labor Senator Murray Watt said the cheque presentation was an attempt to “mislead Australians” about the source of the funds, and questioned how Senator Hanson had been allowed to announce the grant prior to the Queensland state election. 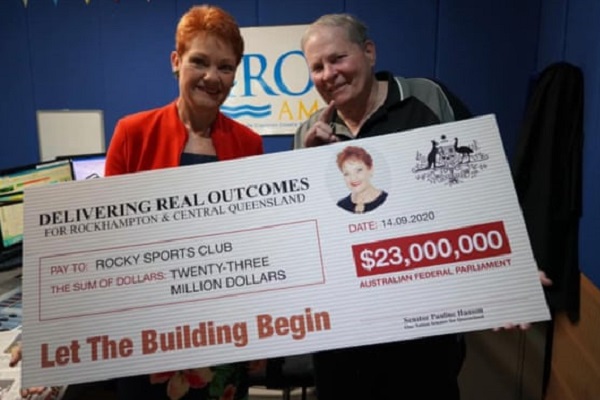 Guardian Australia revealed on Friday that Senator Hanson had used the cheque to announce funds that are committed but yet to be delivered through the Federal Government’s Community Development Program.

In a Facebook post on Monday 14th September, the One Nation leader said that she was pleased “to hand over a $23m cheque to build Rocky Stadium” and attributed the funding to a dinner she had with “the prime minister and finance minister last September”.

Senator Watt wrote to the Auditor General citing the story and complaining that “nowhere does Senator Hanson indicate the real source of the funds”.

Senator Watt noted that the cheque purported to be issued by Senator Hanson and the 'Australian Federal Parliament' and bore her image and branding.

He advised that the funding, also announced by Federal MP for Capricornia Michelle Landry, for the development “is not a gift from Senator Hanson”, adding "iIt is completely inappropriate for Senator Hanson to treat taxpayers’ money as if it were her own, and to mislead Australians about the true source of these funds.

“Taxpayers’ money should not be treated as campaign contributions to, or as gifts from, individual politicians or political parties.”

Senator Watt noted Senator Hanson’s conduct was “reminiscent of the circumstances surrounding Ms Georgina Downer’s presentation of a cheque to the Yankalilla Bowling Club in March 2019”.