MP presents $1.5 million novelty cheque to sports club despite funds not being approved 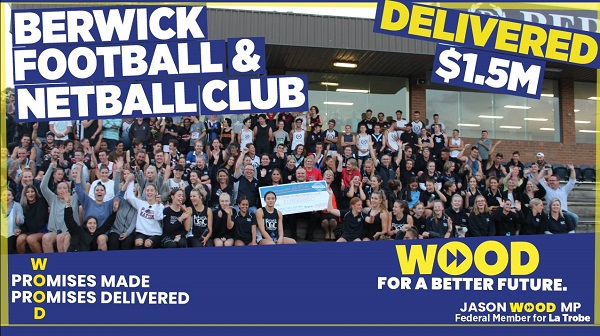 With politicians making numerous financial pledges to a range of arts, sport and tourism projects in the run up to the Federal election, a Liberal MP has presented a $1.5 million novelty cheque to a local sports club in his marginal seat of La Trobe despite funding not being approved.

Late last month, Liberal MP Jason Wood handed over a $1.5 million cheque to the Berwick Football and Netball Club in his marginal seat of La Trobe, snapping photos with happy children and staff and posting the news to Facebook, writing “Delivered $1.5m.”

However, as reported by the Guardian Australia and The Transparency Project, funds for the project have yet to go through due diligence and final approval.

Deputy Prime Minister, Michael McCormack has subsequently written to the Club to congratulate them and confirm the funding commitment of “up to $1.5m” while warning the Club not to spend the money or begin any work.

The letter, obtained by Guardian Australia, said this was because the grant was contingent on “final due diligence” and final agreement.

Deputy Prime Minister McCormack wrote “whilst this letter confirms the commitment to your project, funding of $1.5 million is contingent upon the execution of a Deed of Agreement.

“I recommend that you do not enter into financial commitments or begin work on the project until such time a Deed of Agreement has been signed with the Australian government.”

McCormack also asked the Club to keep his letter confidential.

Wood holds the marginal Victorian seat of La Trobe, and faces a tough battle to keep it for the Liberals in next month’s federal election.

The money was to be given to the club through the Community Development Grants Program (CDGP), which aims to fund long term improvements to the social and economic viability of communities.

Political parties frequently  make funding commitments to local groups, and then later have them funded through grants programs such as the CDGP.

Money was committed using the CDGP in a similar fashion during the 2013 and 2016 election campaigns, and the auditor general last year largely found no problems with the way the program was run. The audit did, however, find that some projects that had been promised money in the lead-up to election were later found to be ineligible for the grant program.

A spokesman for the Deputy Prime Minister said the funding for the Berwick Club was in the budget and ready to be spent. He said the process followed was no different to other commitments made by the CDGP.

“Since this time, the relevant department has contacted the club and commenced the process of finalising a funding agreement with the club.”

However, there are concerns about the way Wood announced the money - using the cheque and claiming the funding had been “delivered” and “secured”, when it had not yet been approved.

Guardian Australia approached Wood for comment but did not respond.

Both Labor and the Liberals have come under scrutiny for handing over novelty cheques and taking credit for yet-to-be-awarded grants in the lead-up to the election campaign.