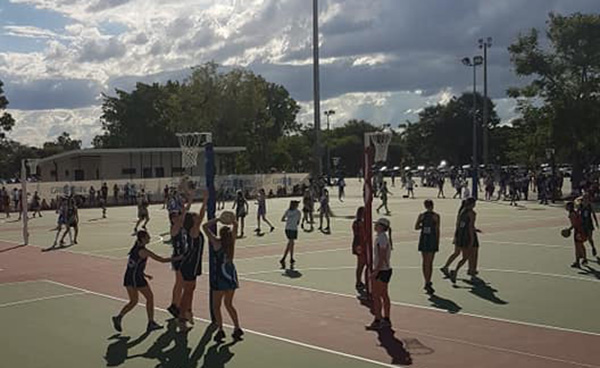 Member for Rockhampton Barry O’Rourke said the Queensland Government had invested $489,083 to build new change rooms to support more participation in netball from women and girls, noting “Jardine Park hosts thousands of netballers every week so it’s important they have a safe, respectful place to shower, get changed to be in the right headspace before a game.

“The two new change rooms will also have toilets, showers, baby change facilities and facilities accessible to people with a disability.

“Works are set to be finished by the end of the month, in time for those all-important end of season finals.”

Rockhampton Netball Association President Kylie Dwyer said the change rooms would be a welcome addition, stating "it’s going to be marvellous. We have been playing with no proper change rooms or disability access so it will be absolutely fantastic.

“Jardine Park is one of the region’s major netball facilities, with 12 fully lit hard courts and another 12 grass courts.

“We host up to 4,000 netballers every week in addition to all the families, supporters and officials, so having suitable change rooms will improve the experience for everyone.”

Queensland Minister for Sport, Mick de Brenni added "this project is more proof that women’s sport is no longer taking a back seat and that we’ll back central Queensland athletes all the way.

“Since 2018 the (Queensland) Government’s Female Facilities Fund has committed funding for a further 45 projects state-wide.

“We have finished 15 of these projects while another 13 will be ready for play by the end of January."

The change room facilities build on the $150,000 also committed by the Queensland Government to resurface five courts setting Jardine Park up as one of the top women’s sports parks in the State.

Rockhampton Mayor Margaret Strelow said she also welcomed the Palaszczuk Government’s $946,594 commitment towards the cost of building a new hockey field, concluding "this will be our second international standard synthetic hockey facility which includes lighting, dugouts and technical benches.

“The new field is nearing completion with the synthetic turf being laid in early July.

“Once completed, the two synthetic pitches will be used for hosting the Oceania Cup in September 2019 which is a qualifier for the 2020 Tokyo Olympics.”