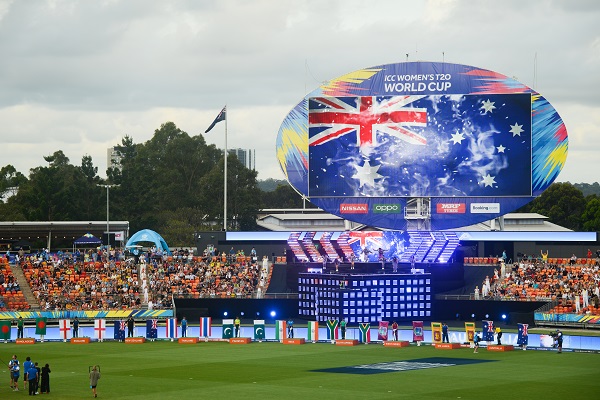 The International Cricket Council (ICC) has claimed that the Women’s T20 World Cup 2020 was one of the most-watched women’s sporting events in history.

From its opening fixture at the Sydney Showground Stadium on 21st February through to the final at the MCG on International Women’s Day, 8th March - with both fixtures contested by Australia and India - the seventh edition of the tournament was a milestone event for women's sport.

Much of the record viewing figures were due to the success of the Indian women’s team in making it to the final, with their presence boosting global audience interest, with total worldwide viewership for the knockout stages more than 400% higher than for the 2018 edition.

According to the ICC, India’s live viewing hours were 86.15 million, which represents a 152% increase over the comparable figures for the 2018 tournament, driven by the Indian team’s success and the broadcast of select India matches by Star Sports in five languages (English, Hindi, Tamil, Telegu and Kannada) across the sub-continent.

Hosts and tournament winners Australia’s live viewing hours were 13.45 million - 473% higher than the 2018 tournament - driven by their hosting and an increase in coverage on the free-to-air channels.

The final recorded an average audience of 1.2 million viewers, making it the most-watched women’s cricket match in Australian broadcast history.

Commenting on the success of the event, ICC Chief Executive Manu Sawhney stated “we are delighted with these outstanding global viewership numbers that demonstrate the power of women’s cricket to attract huge audiences across the globe.

“It reinforces our belief that there is a significant opportunity around the women’s game and collectively we must promote it further so more fans can enjoy it, more kids are inspired by it and sponsors and broadcasters want to be a part of it.”

The event was held immediately before Coronavirus shutdowns impacted nations around the world.

The Men’s T20 World Cup is scheduled to run from 18th October to 15th November although there is uncertainty as to whether it will be held.

In addition to the Sydney Showground Stadium and MCG, venues used during the tournament included the WACA in Perth, Manuka Oval in Canberra, Junction Oval in Melbourne and the Sydney Cricket Ground.

The delivery of the audio-visual technology for the opening of the Women’s T20 World Cup at the Sydney Showground Stadium is the subject of a feature in the next issue of Australasian Leisure Management.

Image: The opening of the Women’s T20 World Cup at the Sydney Showground Stadium. Courtesy of The P.A. People.