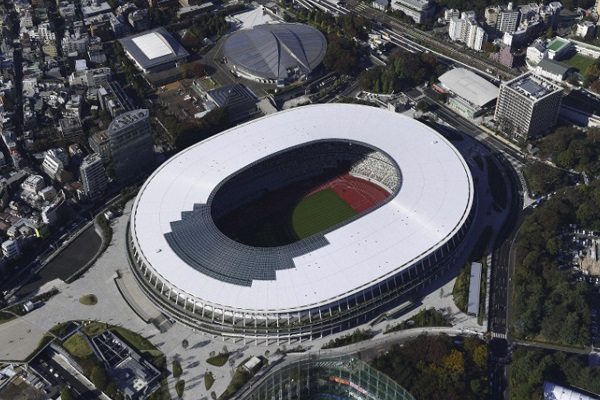 The Japan Sport Council has announced that construction work on Tokyo’s new National Stadium, the main venue for the 2020 Olympics and Paralympics, has been completed.

The 60,000-seat venue, built at a cost of 157 billion yen (US$1.4 billion), will serve as the centrepiece of the 2020 Games next summer, hosting the opening and closing ceremonies of the Olympics and Paralympics as well as athletics and football events.

Advising that only final quality and safety checks are needed before the venue can open to the public, the Japan Sports Council is set to hand over the Stadium to authorities on 30th November in advances of a celebratory ‘One Race’ event and grand opening next month.

The first sporting event at the new venue will be the final of the Emperor’s Cup football competition on 1st January.

Dogged by delays and design changes, an original design by the late Iraqi-British architect Zaha Hadid, which had been planned to be completed for the recent Rugby World Cup, was discarded over cost concerns.

The delay meant it could not host Rugby World Cup matches, with the recent final played in Yokohama.

The completed venue features a plant-covered facade designed to maintain harmony with the natural landscape of the neighbouring Meiji Jingu Gaien area, while the eaves of the distinctive roof is made of wood gathered from the country's 47 prefectures.

The Tokyo 2020 Olympics will run from 24th July to 9th August next year, with the Paralympics to follow from 25th August to 6th September.

Management of the venue after the Games is uncertain, with Japan’s Education Minister Koichi Hagiuda advising that the Japanese Government has decided not to draw up a plan to immediately privatise its operations.

According to Minister Hagiuda, the privatisation scheme has been pushed back for security reasons, as detailed architectural drawings of the Stadium cannot be shown to potential bidders for the time being.

After undergoing post Games renovations, the venue is scheduled to start commercial operation in the latter half of 2022.

Last week saw Japanese media report that archaeologists had discovered the bones of 187 bodies during construction, believed to be the remains of an ancient cemetery housed within the grounds of a Buddhist temple demolished a century ago.

Image: The new Japan National Stadium in Tokyo, the main venue for the 2020 Tokyo Olympics and Paralympics, as photographed last week. Courtesy of Mainichi.