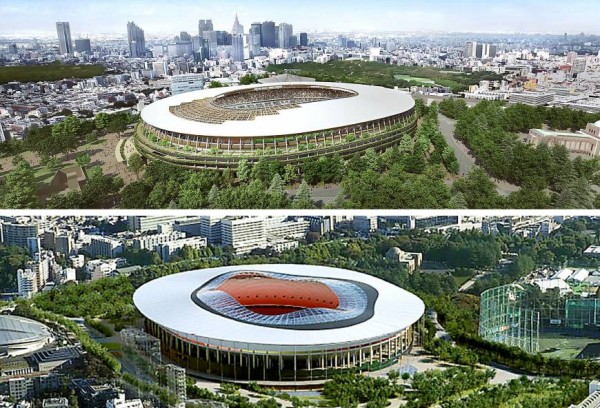 The Japan Sport Council has unveiled two new stadium designs for the 2020 Tokyo Olympics, each of which will cost considerably less than the ¥252 billion (US$2.04 billion) design scrapped earlier this year.

The two construction plans released by the Japan Sports Council (JSC), which is overseeing the project, showed that the cost of each design would be around ¥149.0 billion yen (US$1.2 billion) – with the project’s ¥155 billion budget.

Under both plans construction is scheduled to be completed in November 2019, well before the January 2020 deadline demanded by the International Olympic Committee. Tokyo is due to host the opening ceremony on 24th July that year.

Explaining the designs on the Japan Sport Council website, said architect and critic Takashi Moriyama stated “both designs use wood in their construction materials, and I think that’s an interesting aspect.

“I think the idea of using wood in large structures may globally impact architecture.”

The two new designs, by unnamed, presumably Japanese architects, are simply called A and B.

Japanese media reports speculated that the designs were submitted by a joint venture involving Taisei Corp., and a another venture comprising Takenaka Corp., Shimizu Corp. and Obayashi Corp.

Moriyama noted both designs take into account the natural environment of their surroundings, which are protected by the urban development law, but in different ways.

Design A features outside walls embellished with plants in multiple layers, while B is notable in that it dispenses with walls around its oval outline, which is formed by 72 wooden pillars.

Moriyama added “personally I like design B because it allows people to enjoy walking around the facility or gather.

“I like it also because it carries over the atmosphere of the old National Stadium.”