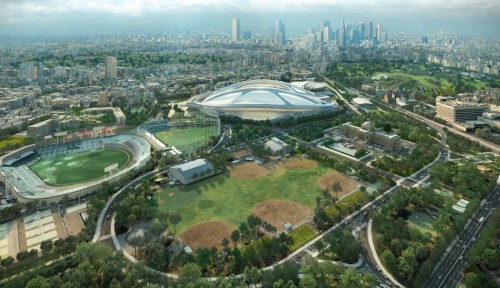 After months of dispute over the cost of the main stadium for the 2020 Olympics, the Japanese and Tokyo Metropolitan Governments have this week reached a deal in which the city will shoulder ¥39.5 billion (US$320 million) of the estimated ¥158.1 billion (US$1.2 billion) construction cost.

It has asked the Tokyo Prefecture and the Japan Sport Council (JSC), which is overseeing the project, to cover the rest.

Governor Masuzoe welcomed the agreement, saying the figure was a result of marathon discussions between the Governments, stating “as the governor of the city to host the Olympic competition in 2020, I would like to accept the budget plan.”

He added that the stadium will remain a legacy of the event and bring long-term advantages for Tokyo residents.

In May, then Japanese Sports and Education Minister Hakubun Shimomura, asked the Metropolitan Government to pay about ¥50 billion (US$400 million) of the estimated budget needed to build the stadium under its original design.

Governor Masuzoe angrily turned down the request and lashed out at the Central Government for mismanaging the project.

Two months later, the JSC revealed the stadium cost had ballooned to ¥252 billion (US$2.04 billion) from the initial ¥130 billion (US$1.05 billion), and blamed difficulties in following the design blueprint proposed by British-Iraqi architect Zaha Hadid.

Amid the public backlash, Prime Minister Shinzo Abe halted on the project and ordered the design process to be restarted.

Shimomura stepped down as Sports Minister to take responsibility for the debacle, with Hase assuming the post in a Cabinet reshuffle in October.

The Olympic Stadium built for the 1964 Tokyo Olympics cost just US$3.05 million.