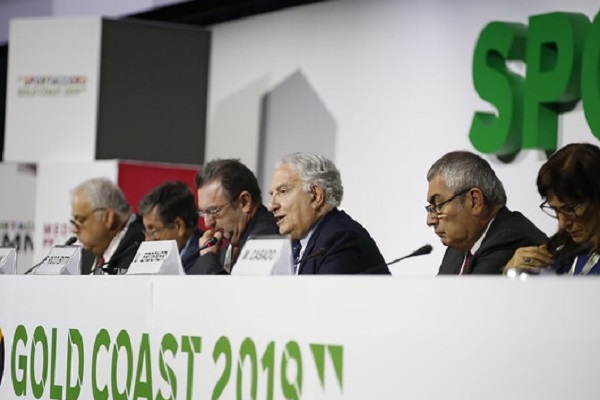 With test events for the 2020 Olympics due to start next month, representatives of the Tokyo Games Local Organising Committee were urged yesterday by Members of the Association of Summer Olympic International Federations (ASOIF) to address a series of concerns.

During a sometimes heated ASOIF General Assembly at SportAccord Gold Coast, successive International Federations raised issues surrounding transport, quality of athlete accommodation and the look of the Olympic sites amid reports of cuts of up to 80% to some Games-related budgets.

In response, ASOIF Members also received a positive presentation from Tokyo 2020 Sports Director Koji Murofushi and Games Delivery Officer Hide Nakamura, who expressed cconfidence that the Olympics will be a great success.

ASOIF President Francesco Ricci Bitti said he would raise the common concerns in his role as a member of International Olympic Committee Coordination Commission for the Games, but he advised IFs to continue discussions with the Tokyo 2020 delegation at SportAccord.

José Perurena of the International Canoe Federation (ICF) and the late Patrick Baumann.

The General Assembly began with President Ricci Bitti leading a silent, standing tribute followed by applause in memory of Baumann, who was a Member of the Association’s Council.

When the meeting got underway, Ricci Bitti gave an upbeat annual report, which highlighted the “very successful” 2018 Youth Olympic Games in Buenos Aires in Argentina and the leading role played by ASOIF Members in the drive towards improving governance.

He added that the ‘Future of Global Sport’ project and report would present an opportunity for international federations by alerting wider audiences to the challenges and threats facing sport.

Ricci Bitti advised “the business community and the government community don’t know enough about what we do, and we need to explain to them our role, the limit of our role, and that a central body for governing sport is vital.”

He said many other people want a “slice of the cake” but added “we are the only organisation that puts back into the game the money that we get from the professional elite side.”

ASOIF Executive Director Andrew Ryan focused on the work of the seven advisory groups set up by the Association to analyse the report, adding that there will soon be an eighth group to deal with diversity and gender equality.

He echoed the comments of Ricci Bitti about the success of the Buenos Aires Games, but warned of the need to provide better support to attract the best young athletes in the world to the 2022 Youth Olympics in Dakar, notably with training facilities.