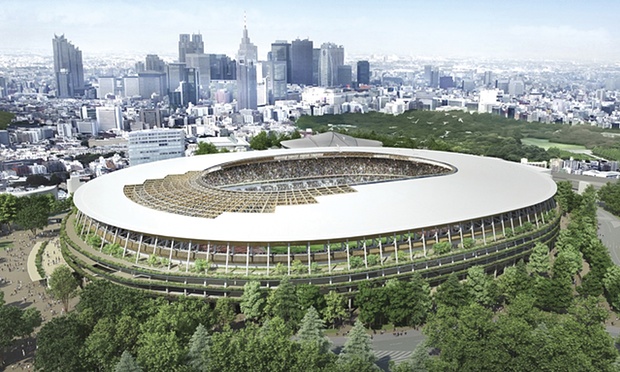 The architect behind Tokyo’s new Olympic stadium has denied that he borrowed elements of the stadium's former design submitted by Zaha Hadid, the British-Iraqi designer whose original stadium design was scrapped last year to cut costs for the 2020 Games.

This week the London-based Hadid complained that the Japan Sports Council (JSC) was withholding payment for her work and demanding that she waive any copyright claims.

When challenged about Hadid’s claims, Kuma told reporters “In the design, I would like to say there are no similarities at all."

Kuma said both architects had to meet strict requirements for the 80,000-seat stadium, to be built on the site of the now-demolished national stadium used when Tokyo last hosted the summer Games in 1964.

Kuma stated "the conditions set for the competition mean that automatically some similarities emerge.

“The concept is completely different, so it is absolutely a different building, despite the similarities”.

Hadid’s office said it had turned down a request by the JSC to hand over copyright of her design in exchange for payment for the work she had submitted.

Her office sent a report to the JSC detailing the similarities in “the structure, layout and numerous elements” between her design and Kuma’s replacement.

Hadid’s office is reportedly consulting lawyers, and said it would “take legal action if our concerns are not promptly addressed to our satisfaction”.

Kuma, whose replacement design was chosen late last month, declined to comment on Hadid’s demand for negotiations over copyright.

The consortium working on the new stadium includes two Japanese companies that earlier worked with Hadid.

The decision by Japanese Prime Minister, Shinzo Abe, to scrap Hadid’s design last July was one of several setbacks to have hit Tokyo’s preparations since it was chosen to host the 2020 Olympics.

In September organisers decided to ditch the Games’s official logo amid accusations of plagiarism against designer Kenjiro Sano. A new logo will be selected in the next few months.

Last month the Tokyo Olympic organising committee admitted that the total cost of hosting the Games would be much higher than the original estimate of just over 300 billion yen (US$2.5 billion) with Japanese media reporting that the estimated bill had soared to 1.8 trillion yen (US$15 billion) due to “unforeseen” extra costs such as the construction of temporary venues, transport and infrastructure, and tightened security.