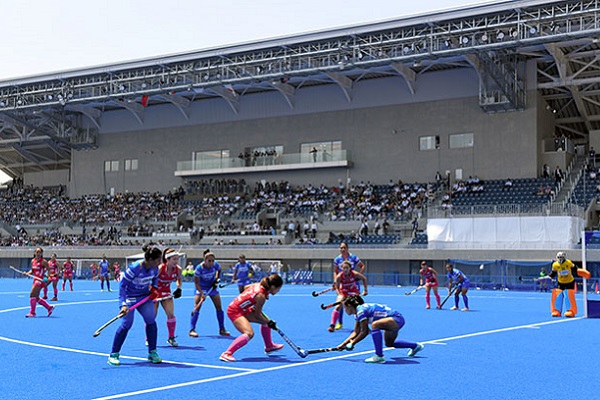 With the 2020 Olympics less than a year away, recent test events for the Tokyo Games have been dominated by fears over sweltering heat and stifling humidity.

Over the past weekend, a series of matches at the newly built Oi Hockey Stadium saw temperatures reach 37 degrees Celsius on Saturday, although with a series of countermeasures in place, there were no reports of heat stroke.

Heat countermeasures included water mist sprays and large fans on the field and players moving inside and away from the sun during water breaks.

As reported by Reuters, hockey teams from countries including India and Australia joined hosts Japan in a series of matches across four days to test out the facilities and gain some experience in dealing with Tokyo’s summer climate.

Temperatures reached 37 degrees Celsius on Saturday, but there were no reports of heat stroke on the opening day.

India defeated Japan 2-1 in the opening match on the main 2,600-seater pitch and for the Indian players, the hot conditions were familiar.

Indian women's captain Rani Rampal stated "it was really rather hot (and) I think every player was getting tired very quickly but in India we are used to this. In India it is really hot nowadays."

"Sometimes it is difficult, but this is sport, we can’t change it."

Japan defender Shiori Oikawa, who played in the Netherlands, said the conditions could prove tricky for European teams next year.

Oikawa added "I have played in the Netherlands for three years, so this is completely different from European climate. It is very difficult."

Tokyo 2020 Governor Yuriko Koike officially opened the venue earlier in the morning at a ribbon cutting ceremony and praised the heat countermeasures in place.

He advised "today we used some mists, various ways of misting ... we also have water hoses normally used for agriculture use for irrigation. So, we are trying varieties of ways of cooling.

"We will use the best methods at Tokyo 2020. To test those countermeasures, I think test events are very important."

After the Olympics, the multi-purpose complex with continue to host hockey, soccer, lacrosse and American football events.

Image: Japan competes against India at the Oi Hockey Stadium on 17th August. Courtesy of The Asahi Shimbun.